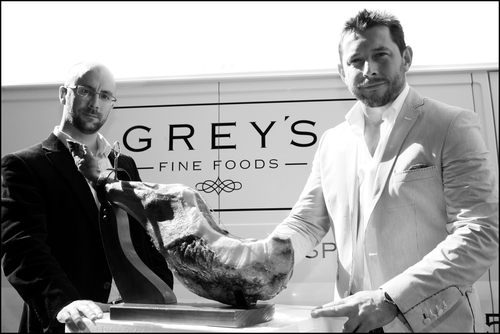 A Yorkshire businessman, better known for being the face behind some of the region’s best restaurants, bars and hotels, is stepping into the world of food retail for the first time with the launch of a premium Spanish food business that he hopes will rival – and better – Brindisa.

Spanish-born Javier De La Hormaza is bringing the best of his home country to British shores with the launch of Grey’s Fine Foods, a retail and wholesale food business which will offer rare delicacies such as milk-fed lamb, acorn-fed Ibérico ham, marron glacé and 100-year-old Brandy – to name but a few of the 100-plus products.

“French and Italian foods are very established here but people have not been given access to top quality Spanish foods like this before,” says Javier, who hails from the Basque region, well known for its fine food and wine. “Spain’s export markets have always been focused on South America and, recently, Germany, with the UK left to one side. But no more! We want to build those bridges and offer a range of fine foods and wines that have been almost impossible to source in Britain in the past.”

The dynamic Spaniard, who inherited his love of food from his grandmother and mother, is no stranger to new launches, having spent seven years orchestrating the opening of several high profile venues in the region as assistant manager at The Clocktower Restaurant at Rudding Park Hotel, manager at the award wining Martha & Vincent Restaurant, and Floridita Restaurant & Bar, and food and beverage manager at Leeds’ Mint Hotel.

But he admits this is his biggest challenge to date. “My business partner Alvaro Del Portillo and myself spent 18 months researching and developing the business and sourcing foods and wines directly from small producers,” says Javier. “We deliberately didn’t source from big suppliers or exporters, which does have its own logistical challenges, but it is a small price to pay, as we are so committed to bringing together artisan food and drink from some of the most remote parts of Spain.”

Javier says this is what makes Grey’s Fine Foods different. “There are no middlemen, we know all the producers and visited them,” he says. “I’ve had a crazy diet over the last 12 months, tasting and testing each product, but from some 500 wines we’ve selected just 50, and from 6-8 ham producers; we’ve selected one, and so on. It’s not a case of ‘this will do’; we believe in each and every product.”

Grey’s wine portfolio also distinguishes it from its closest competitor, Brindisa, with a range that includes a 100-year-old Peinado Reserva brandy, premium Cava, ‘Spanish Burgundies’ from Bierzo and critically acclaimed reds from Ribera Del Duero. “Spanish wine has grown massively in both quality and popularity over the last few years – it is the New World of the Old World,” says Javier. “There are so many wonderful styles and types and we have a range that competes with the best European wines.”

Currently delivering to delis, restaurants and private clients within Yorkshire, Javier sees a bright future for Grey’s with plans to begin deliveries in cities such as Liverpool, Leeds and Manchester in the next few years, combined with the launch of new Spanish gastro bar concept.

“You only have to look at the supermarket shelves with their hummus, Spanish olives, cheeses and hams to see that demand for Spanish produce is growing,” he says. “Yorkshire has been my home for 15 years and it’s a brilliant starting point for this business as there is nothing like this around here. We have lots of plans but first and foremost we want to become the Spanish gourmet specialist in the North – that should keep us busy for a while!”