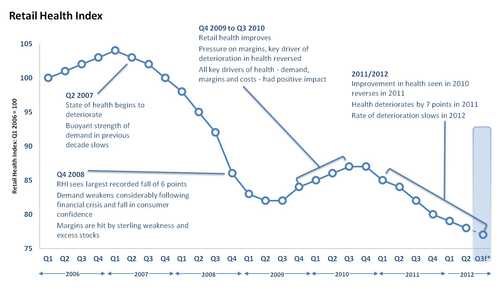 consumers are instead in reactive mode, responding to opportunities as and when the mood takes them

- Demand in quarter two was better than expected, but still detrimental to the health of UK retail. A similar trend is expected in quarter three.

- Margins were better protected in quarter two than quarter one as promotional activity and discounting was more targeted and discreet.

- Costs remained largely neutral rather than detrimental to health.

According to the KPMG/Ipsos Retail Think Tank (RTT), the state of retailing was not quite as bad as in quarter two as it had predicted it would be back in April. The Retail Health Index (RHI) dropped one point to 78 over the quarter, maintaining the rate of decline seen in quarter one. The RTT expects this rate to continue in quarter three. Though the health of the sector is still in the doldrums, the downward gradient is not as steep as it was over the second half of 2011.

Following its meeting in July 2012, the RTT – a panel of retail experts that meets quarterly to provide authoritative and independent views on issues affecting the sector – states that summer events have helped bolster retail sales, and without them the sector would have suffered far greater. The underlying state of the economy continues to plague retailers affected by one of the country’s wettest summers on record; this despite petrol prices decreasing slightly and inflation easing.

At the end of quarter one, the RTT had predicted another difficult quarter ahead for the retail industry, whilst acknowledging it would be buoyed by The Queen’s Diamond Jubilee celebrations. That proved to be the case, with food and drink sales in particular, boosted. However, the rise in footfall and sales on the back of the Jubilee was immediately dampened by poor weather, which has remained. This was in stark contrast to the Royal Wedding in 2011 when the event created a feel-good-factor that brought about a three-week mini boom for retailers.

RTT members agreed that April was a dire month, and were it not for the week of good weather in May and the Jubilee week in June, the quarter would have been far worse. On a positive note, though, RTT members reported that demand for indoor goods, including home ware and small electrical goods, is more robust, as households put more emphasis on home living and home entertainment. The inclement conditions and televised sporting events (such as Euro 2012 and Wimbledon) were also factors at play.

In the current abandonment of normal shopping patterns, of shopping for summer clothes as collections are released during spring and early summer, and for seasonal goods and equipment for the garden and outdoors, consumers are instead in reactive mode, responding to opportunities as and when the mood takes them. Demand is far spikier than before.

Helen Dickinson, Partner and Head of Retail, KPMG UK, said: “Overall, there have been some downsides and upsides to retail health in the quarter, but nothing especially dramatic, including the impact of the Jubilee. Costs remained pretty neutral and it was really low demand and eroded margins that were the two weakest links. The underlying trend is still very weak. When the good weather has appeared occasionally, it’s had an impact, but people are only spending then because they’ve been holding back.”

Dr Tim Denison, Director of Retail Intelligence at Ipsos Retail Performance, said: “Earlier in the year we saw a lot of promotional and discounting activity among retailers, but this could not be sustained because margins were taking a real hit. There has been some similar activity in quarter two, but this has been more discreet and targeted. In some cases, retailers have got away with offering a little bit less than they did in quarter one. Notably, the launch of summer sales at the end of June helped to lift footfall.”

Neil Saunders, Managing Director of Retail Analysts, Conlumino, added: "Shoppers spent far less in April, especially on summer stock. What we have noticed, though, is latent demand among consumers. Spend that would have happened in April was brought into both May and June. Much of this was driven by the Jubilee which was a fantastic excuse for people to splash out a little. Without this impetus the whole quarter would have been extremely subdued.”

Vicky Redwood, Chief UK Economist at Capital Economics, said: “Consumer confidence failed to pick up over the past quarter, consistent with the idea that underlying demand remains relatively weak - perhaps because disposable incomes are still under significant pressure. We will see real incomes rising soon for the first time in a long time, but pay is still below inflation. And other uncertainties, such as the Euro crisis, are having an impact on credit conditions, so all in all it’s still a bit of a minefield for consumers and retailers.”

Mark Teale of CB Richard Ellis, said: “There is a degree of consumer boredom with the High Street offer. It is not just the clone-town thing. Many brands are pretty tired: it is no coincidence that many of the multiples that have slipped into administration over the last 3-4 years had been around, with very similar offers, for many years. You can see the same thing happening with the traditional food court. Much of the fast-food offer is pretty tired too. High Streets need change. They need new blood. That is happening at the luxury end of shopping, most obviously in Central London. It is also happening at the discount end. Change elsewhere is at a snails’ pace, not least because many retailers are simply struggling to keep their heads above water and new entrants are few and far between. We are in recession after all. But new offers will grow out of the wreckage.”

Independent Retail Analyst, Nick Bubb, said: “The type of purchases by consumers have been highly skewed towards indoor goods such as televisions, other electronic and electrical devices, and other home related products. By comparison, the food sector is under intense pressure because it’s driven by events and promotions. The weather has had an impact, but it works both ways; people sometimes shop because there’s nothing else to do! What this all means is that we’ve seen wide variations in the performances of different retailers, such as John Lewis and Marks & Spencer.”

Commenting on the next quarter, Richard Lowe, Head of Retail & Wholesale at Barclays, said: “There should be some upsides this summer as sporting events take prominence, enticing a greater number of overseas visitors to the Capital. Early summer sales have already given a much-needed boost to retail sales and contributed somewhat to the recent fall in inflation. This drop in inflation will benefit most households, however it will take time for this to have a material impact on consumer behaviours in terms of changing spending habits.”

Summarising the RTT’s July discussion, Helen Dickinson of KPMG, said: “The health of UK retail in quarter two was pretty much as expected and our forecast for quarter three is much the same as quarter two. There continues to be a poor and underlying situation facing retailers that pushes out any sign of recovery for the sector. The question is whether or not we will see any upturn. In other words, is the situation now normal, will it get worse, or is the ‘new normal’ just slightly better than what retailers are currently experiencing? The fact might be that yesterday was much better than it should have been.”

Definitions: The RTT assesses the state of health of the UK retail sector by considering the factors that influence its three key drivers.