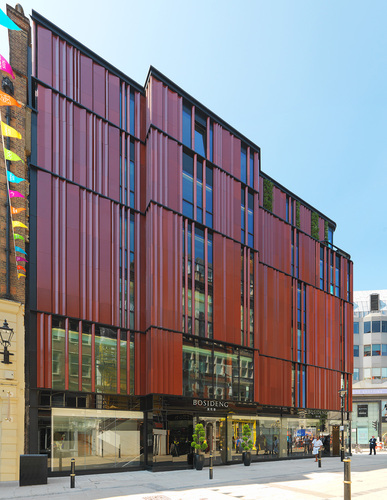 Chinese men’s fashion retailer Bosideng opened the doors to its first European flagship store in the heart of London fashion, the West End, on 26 July 2012.

Located just off Oxford Street on South Molton Street, the 30 million GBP building is home to Bosideng’s new premium menswear collection, designed for the European market by Nick Holland and Ash Gangotra, who have previously collaborated with Oasis’ Liam Gallagher on his Pretty Green label.

Considered the first Chinese retailer to have moved over to the UK, Bosideng is a market leader in China with over 10,000 outlets, but the London store is its first overseas flagship store and will act as the company’s European headquarters.

“After years of planning, we’re delighted that our first overseas flagship store is open,” said Bosideng UK CEO Wayne Zhu. “It’s a pleasure to give the public the opportunity to browse our excellent European Autumn Winter collection.”

For further information please visit www.bosidenglondon.com or contact a member of the Bosideng London corporate PR team on bosideng@rsm-agency.com or +44 (0)1908 635300.

• Bosideng was established in the People’s Republic of China (PRC) in 1976 by Mr Gao Dekang
• The Bosideng flagship brand was launched in 1992
• It has over 10,000 retail outlets with a brand portfolio that includes six core brands
• Its four down apparel brands achieve a combined market share of 36.7 per cent
• Complementing the down clothing business in China are Bosideng’s non-seasonal brands: Bosideng Man; Bosideng Ricci (ladies’ casual wear); Vetallo (high-end menswear); Jessie (high-end ladies’ wear), and casual wear brand Mogao
• Bosideng Man is expected to grow to approximately 1,100 retail outlets by mid-2012, with the objective of becoming the leading menswear brand in the PRC
• Mogao is forecast to open up to 200 new outlets annually in the next five years, taking the total number of stores to approximately 1,500 by 2015
• Bosideng plans to establish around 100 Bosideng Ricci stores within three years and will continue to build its network of Bosideng flagship stores