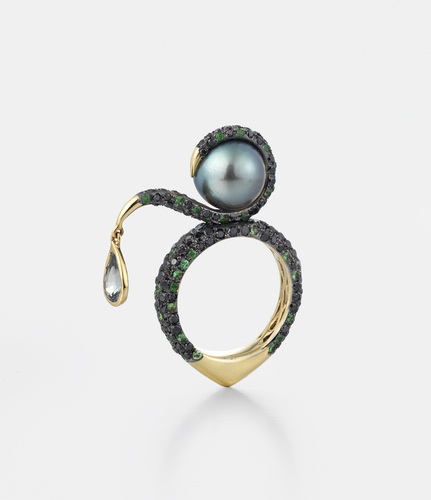 AN OPPORTUNITY TO MEET AND BUY FROM LEADING DESIGNER-MAKERS

While a 60th anniversary is associated with diamonds, 30 years are commemorated with pearls – spherical beads, made up of lustrous layers of minute crystals of calcium carbonate that develop in the living tissue of an oyster into exquisite natural jewels.

Rather like the pearl, over the past three decades Goldsmiths’ Fair has evolved into what is now universally regarded as one of the gems in the contemporary design calendar, beloved by designer-makers and collectors alike.

The first Goldsmiths’ Fair took place in 1983 and is now the most visual and high profile way in which the Goldsmiths’ Company supports its trade, something it has been doing for more than 700 years. With a considerable national and international following, the Fair today is the ultimate show-case of what is up-to-the-minute in the world of contemporary jewellery and silver, demonstrating stylish, innovative design, combined with high quality workmanship.

Over a period of two weeks 180 jewellers and silversmiths present – in person – their latest designs and collections to an ever-expanding, appreciative audience. There is jewellery and silver for every occasion and in a wide variety of styles and permeations – each piece reflecting the unique creativity and artistic personality of the individual designer-maker working in precious metal.

Aside from the incredible range of exciting jewellery and silver, one of the particularly special aspects of the Fair is being able to meet the designers themselves. This gives an insight into the whole making process from start to finish – something which is rarely achievable when buying off the peg from a shop. The whole experience is therefore more personal and comes with added value, while commissioning a new piece takes the whole process to an even more intimate and satisfying level.

Appropriately in the year of the Fair’s “Pearl” Anniversary there is an abundance of these beautiful, iridescent beads from the classic creations of Eric N Smith and Jane Sarginson, as well as less traditional but equally exciting pearl jewellery by Catherine Mannheim, Yen, Ornella Iannuzzi, Jesper Velling and Jane Adam. Two other jewellers Mikala Djorup and Josef Koppmann are using unusual faceted pearls.

The silversmiths similarly employ their considerable skills to provide a huge variety of different objects demonstrating Britain’s pre-eminent status in the field of contemporary silversmithing. There is a huge range of practical, yet simultaneously stylish silver such as jugs from Graham Stewart, sauce-boats from Brett Payne, ladles by Rauni Higson, to pieces which serve simply to decorate and highlight the preciousness of the metal. For example an exquisite, silver box by Adrian Hope opens up to reveal a gilded tree. Or there is Vladimir Böhm’s almost subversive treatment of silver where he moulds a sculptural form in wax which is then cast and the resulting highly fluid, sculptural silver form is brushed with liver of sulphur to create a dark, edgy patina that is far removed from the expected traditional look of shiny silver.

From its start 30 years ago, Goldsmiths’ Fair has not only been a platform for the most acclaimed independent designer-makers on the scene but has reached out to find exciting, emerging young talent. This year is no different. Ten graduate designers – five in each week – have been given free stands to exhibit their work to the discerning audience that attends the Fair. The contacts, relationships, knowledge – and best of all, the sales – made during the Fair are invaluable and provide these young graduates with a major boost at a critical moment in their careers. This is another way the Goldsmiths’ Company supports and fosters the development of young craftspeople. And who knows which of these bright young stars will turn out to be the next Stephen Webster or Malcolm Betts who both started their careers at Goldsmiths’ Fair. This year’s graduates include: Stacey Bentley (jeweller), Barbara Macleod (jeweller), Katie Roberts (jeweller), Kerry Seaton (jeweller), Maud Traon (jeweller), Petra Kapralova (silversmith), Jack Row (silversmith), Lee Simmons (silversmith), Louise Walker (silversmith) and MaxWarren (silversmith).

No one visiting the Fair can fail to be impressed at the sheer breadth of variety, talent and superlative craftsmanship on display. Thirty years on Goldsmiths’ Fair is still scaling new creative heights of excellence.

Entrance by catalogue purchasable on the door (£7 for one week, £12 for two weeks)

FACIILITIES:
Licensed Café on site offering drinks and delicious food throughout the day