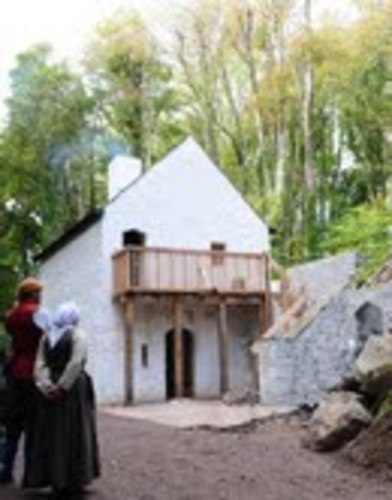 A small late-medieval house from Haverfordwest is the latest building to be re-erected at St Fagans: National History Museum and has been officially open to the public from the beginning of July making a great family day out. Visitors will be welcomed into the house, as re-enactors use traditional skills to cook the first meal on the hearth, since the building’s arrival at the museum

This is only the second building from Pembrokeshire to have been rebuilt at the Museum, following the opening last year of the clogmaker’s workshop from Ysgeifiog near Solva. The rebuilding of this house was recently featured on a BBC2 documentary ‘Brick by Brick’ and from the 2nd of July visitors to St Fagans will be able to experience for themselves what it would have been like to live and work in a Tudor trader’s house

This little house was originally built against a steep wooded bank behind Quay Street in Haverfordwest, and its proximity to the old quayside suggests that it may have been the home of a trader. Its construction, with a vaulted undercroft, is reminiscent of the solid castle building techniques found in domestic structures in many parts of Pembrokeshire at that time.

The owner probably bought and sold goods which were traded in the busy port town of Haverfordwest. The occupants lived upstairs where there was a single room, with an open fireplace at one end. A small croglofft (half-loft) provided sleeping accommodation. Next to the fireplace was a garderobe (toilet) which discharged into a gutter outside the building. The vaulted ground floor was used a store, where valuable goods such as corn, wool, hides, salt, fish, soap, cheese or casks of wine were kept before being sold.

Replica items have been used to furnish the house to show how it may have looked about 1580, by which time goods were being traded to and from Bristol and the West Country as well as along the Welsh coast, Brittany, Ireland, France, Spain, Portugal and north America. During the Elizabethan period, Haverfordwest was a bustling cosmopolitan settlement which George Owen reckoned (in 1603) was the second most important trading centre in Wales.