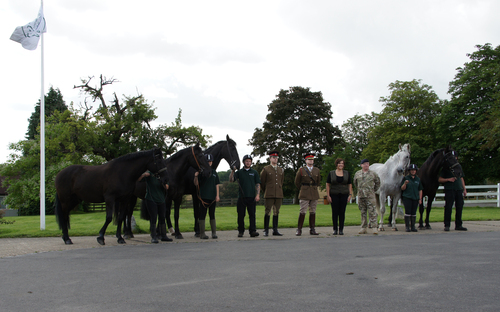 On Friday 3rd August 2012 The Horse Trust in Speen, Buckinghamshire, will welcome five very special new residents all retiring from the Military after many years of service, and one of the busiest ceremonial seasons of recent years.

The oldest equine charity in the world, The Horse Trust has been caring for the needs of working horses for 126 years. CEO, Jeanette Allen said: “We are delighted to be offering a tranquil retirement to such long serving and hardworking horses. The Horse Trust has been taking in retiring army horses since the First World War and we are immensely proud of our long relationship with the armed forces.”

Remus, one of the oldest serving horses in the Army at 26 years old, and the longest serving military horse still alive today, is retiring from his duties. Remus started his military service originally as a Troop horse in the Household Cavalry Mounted Regiment, and latterly as an officer’s charger of the Household Division.

Grey beauty Lochnagar comes from the Defence Animal Centre (DAC). “Lochy” comes with an illustrious show jumping career under his belt having, with his rider, former Riding Master Capt. Mark Avison, won the Services Cup at the London International Horse Show, Olympia three years in a row; most recently in 2011 where The Horse Trust were charity of the year.

Lt.Col. Richard Pope, Commanding Officer of the DAC in Melton Mowbray, where many of the animals who serve in the military are trained, will be at The Horse Trust’s Home of Rest to formally hand over the five old war horses for their retirement.

Three of the horses, Commando, Zulu and Union come from The Blues and Royals Squadron of the Household Cavalry Mounted Regiment in London. Stunning 15 year old Commando has served at every high profile parade since 2002. Notably he is one of only a few horses to have served on The Royal Wedding and both the Golden and Diamond Jubilee Parades. Commando has also been the bearer of Her Majesty’s Blues and Royals Standard. Capt. Simon Lukas describes Commando as having, “a particularly good stable disposition and apart from his dislike of horse boxes, he was an easy horse to work with. Very much liked by the members of 1 Troop, The Blues and Royals, overall he was a perfect Cavalry Black and will be missed.”

Commando will be coming to The Horse Trust with two stable mates. Union is a 23 year old named after the historic union of The Life Guards and The Blues and Royals to form the Household Cavalry Regiment. He served for 18 years and became a Squadron favourite, nick-named 'Onion' by the boys. He has served on State Escorts, Queen's Life Guard, and has also been used by Corporals Major as their Standard Horse because of his steadiness on parade.

18 year old Zulu joined the Household Cavalry at the tender age of 4. He has seen a succession of soldiers rise through the ranks and there are many “wizened war veterans” who will shed a tear to see Zulu retire.

Adjutant of the Household Cavalry Mounted Regiment, Capt Roly Spiller said, “After one of the busiest ceremonial seasons of recent years, the Regiment wishes Zulu, Union and Commando a long and happy retirement at The Horse Trust”.

A high resolution photograph of the handover, including all the horses mentioned in this release, is available to download here

• Handing over the Horses:

• Receiving the horses for The Horse Trust:

• The Horse Trust, founded in 1886, is the oldest horse charity in the UK. Based at Speen, Buckinghamshire, it provides a place of retreat for working horses that have served their country or community and nurtures them throughout their final years. The charity also gives sanctuary to horses, ponies and donkeys that have suffered and need special treatment. The Horse Trust funds non-invasive research that advances knowledge of equine diseases, improving diagnosis and treatment and reducing suffering among equines worldwide. The charity also offers training for professionals and owners, with a focus on equine welfare and quality of life assessment.

• The Defence Animal Centre (DAC) is located at Melton Mowbray and has developed into the epicentre for training, research and development in the use of animals in Defence for an ever increasing variety of tasks. Their mission is to deliver trained Military Working Animals and motivated personnel trained in their handling, training and management, in order to meet the needs of Defence.

• The Services Jumping Championship allows military horses and riders to compete in a show jumping event and this particular event takes place annually at The London International Horse Show, Olympia.