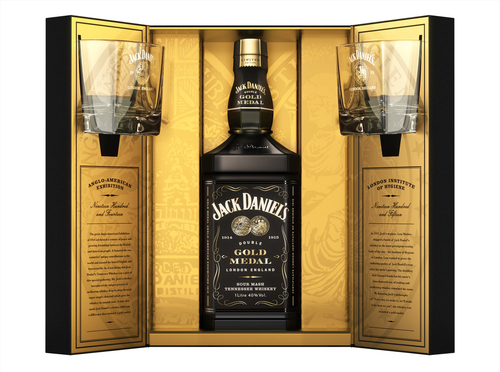 the perfect commemorative keepsake for all those that appreciate both the legacy and the fine taste of Mr. Jack’s Tennessee whiskey

Only devoted fans of Jack Daniel’s know about the fine Tennessee whiskey’s triumphant double gold medal win in London of nearly 100 years ago and we thought it was time to share this truly glorious story with all friends of Jack. To commemorate Jack Daniel’s winning two gold medals in London in 1914 and 1915, a special collectable limited edition bottle and gift pack is available to those travelling from the UK’s capital airports.

The Jack Daniel's Limited Edition Double Gold Medal Bottle and Gift Pack are as smooth as its contents. Packaged in a stylish black and gold gift box, a sleek matte black 1L bottle of the iconic Old No.7 stands podium-style, with two commemorative glass tumblers each featuring the years of the gold medal victories. The highly distinctive and unique design of the gift pack makes it the perfect commemorative keepsake for all those that appreciate both the legacy and the fine taste of Mr. Jack’s Tennessee whiskey.

With an RRP of £75, the Jack Daniel’s Limited Edition Double Gold Medal Bottle and Gift Pack is available exclusively from World Duty Free shops or can be pre-ordered online from http://tinyurl.com/JD-double-gold-medal for collection by those travelling through or returning to London’s Heathrow, Gatwick and Stansted airports between July and September while stocks last.

The true story of the Tennessee whiskey’s double victory takes us back to 1914, when London’s Anglo-American Exhibition celebrated a century of peace and growing friendship between the British and American people. It honoured the two countries’ unique contributions to the world, including Jack Daniel’s whiskey, which introduced the unique process of mellowing whiskey drop by drop through sugar maple charcoal to give it a smooth taste. It was this special distinction that earned Jack Daniel’s a gold medal.

The whiskey was also victorious the following year in 1915, when the Institute of Hygiene recognised Jack’s philosophy of ‘Every day we make it, we’ll make it the best we can’. Lem Motlow, Mr Jack’s nephew, shipped a bottle of Jack Daniel’s to the prestigious testing body in London to prove the continuing excellence of the whiskey even after his uncle’s passing. Although the distillery had passed into the hands of Jack’s nephew by this time, the time honoured way of making and mellowing the whiskey remained the same and Jack Daniel’s was awarded a gold medal.

Officially registered with the U.S. government in 1866, Jack Daniel Distillery, Lem Motlow, Proprietor, is the oldest registered distillery in the United States. Based in Lynchburg, Tennessee, it is the maker of the world-famous Jack Daniel’s Old No. 7 Tennessee Whiskey.