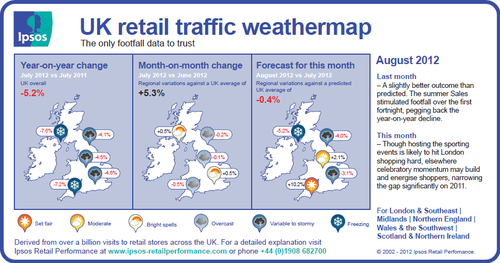 There is much conjecture about the likely impact of the Games on retail sales and footfall.

The latest results from the Retail Traffic Index (RTI), which monitors the volume of shoppers in non-food stores across the UK, continued to record disappointing national footfall levels in July with a 5.2 per cent year on year decline (vs July 2011).

Although footfall remains very fragile on Britain’s high streets, in the past two months signs have been slightly more encouraging. A strong end to June, brought about by the launch of the summer sales, carried on into the first fortnight of July. The RTI, compiled by Ipsos Retail Performance, shows that footfall for the month as a whole ended 5.3% stronger over June.

Dr Tim Denison, Head of Retail Intelligence at Ipsos Retail Performance, says: “The summer sales helped to keep some momentum going after the Jubilee week in June, underlining the belief that consumers are prepared to go shopping when they have good occasion to do so. Although the summer months are less critical than some others for the retail sector, another improved shopping month in August would help give retailers hope and some grounds to believe that the next important month in the calendar - back-to-school September - will also be better.”

Despite no reported improvement in consumer confidence, as shown in the Ipsos-MORI’s Economic Optimism Index that flatlined in July, special events are playing an important part in nudging footfall upwards.

“We are not yet seeing any sustained uplift in the underlying trend when these special occasions are excluded, so we can be thankful for this summer of events,” says Denison. “There is much conjecture about the likely impact of the Games on retail sales and footfall. In truth it is too early to tell, but we can hope that they energise shoppers and build further momentum.”

Meanwhile, the Office for National Statistics sales data for June showed that big ticket items were back on the household shopping list; and Ernst & Young ITEM Club has forecast that real disposable income will rise by 1.5 per cent in quarter four of this year.

“We are at last beginning to hear some good news stories in retailing,” says Denison. “These are the sorts of nuggets that help foster a belief that the end of the decline may be not too far down the track.”