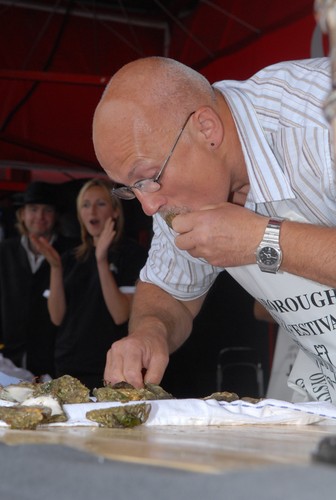 Each year challengers from across the globe descend on the historic village of Hillsborough, Co.Down in Northern Ireland for the World Oyster Eating Championships.

The competition involves consuming as many oysters as is possible in three minutes, and competitors this year will yet again have to contend with County Down man, Colin Shirlow, who holds the World Record with a staggering 233.

Colin set the Guinness World record in 2005, just days after tasting his first oyster at a friend’s BBQ.

“The oyster has to be lifted by the shell and scooped into the mouth, usually by a sucking motion, but you can only put one shell to your mouth at a time”, said Colin on his winning technique. “I don’t eat oysters at any other time of the year.”

The competition takes place every year in September and so far no one has been able to defeat 56-year-old Colin and take his world record.

Festival chairman Sean Hall remarked: “We have had competitors from all over the world but local man Colin has come out on top year-on-year.

“Colin will be back at the Festival this year, which runs from 6-9th September, to defend his title. We would love to hear from interested contenders who think they have what it takes to be a record breaker”.