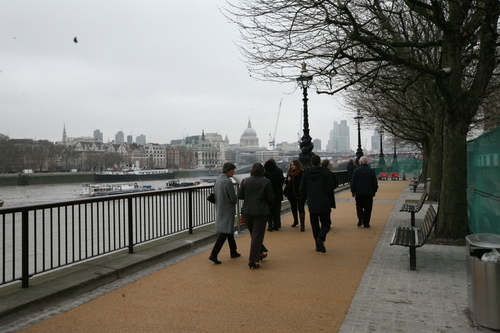 The resin bound surfacing was completed in time for the crowds to watch the Jubilee Pageant.

The Queen’s Silver Jubilee was marked with the creation of the Jubilee Walkway, an integral part of which was the introduction of pedestrian access along the south bank of the Thames, known as Queen’s Walk.

As part of preparations for the Diamond Jubilee thirty five years later Lambeth Council made the decision to have the area ‘smartened up’. Part of this operation was to replace the worn resin bound surfacing on the Queen’s Walk between Waterloo and Blackfriars bridges. The surfacing needed to be laid in time for the Jubilee celebrations which would attract many tourists, particularly for the Jubilee Pageant when crowds would line the banks of the Thames watching over 1,000 vessels participate in a flotilla from Battersea to Tower Bridge..

FM Conway were contracted to lay new resin bound surfacing to 2700 square metres of the five metre wide pathway and Sesame Gold aggregate was selected to brighten up the route.

The RonaDeck Resin Bound Surfacing System was supplied as a two-component UV stable polyurethane resin, the two components were mixed with a slow speed drill and paddle before being added to a large forced action mixer containing the Sesame Gold aggregate blend. FM Conway spread the RonaDeck Resin Bound Surfacing to level and smoothed the surface with a steel float. The finished surface was ready for foot traffic within four hours.

The resin bound surfacing was completed in time for the crowds to watch the Jubilee Pageant. Now the ‘golden path’ provides a route which takes tourists and commuters past many well known buildings and locations in the capital city. Starting at Waterloo Bridge it runs past the National Film Theatre and the National Theatre through Gabriel’s Wharf, past the IBM building and London Television Centre alongside Bernie Spain Gardens and through Oxo Tower Wharf passing the art-deco Oxo Tower and Sea Containers House, finishing at Blackfriars Bridge close to the Tate Modern.

Resin Bound Surfacing is a UV stable resin bound aggregate surfacing; its functional properties and decorative appearance make it an attractive choice for a wide range of paving applications.