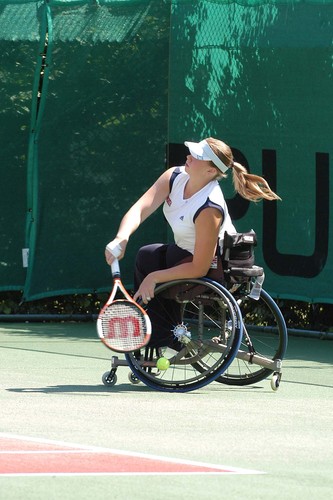 Without the equipment supplied by the charity I wouldn't be where I am today, competing in London 2012

Paralympic champions from Beijing and competitors for London 2012 have thrown their support behind a new single released this month to help raise funds for a charity that gets disabled kids into sport and music.

The single, called Light the Flame and sung by former X Factor finalist Andy Abraham and the Elmbridge Choir, will raise money for charity Get Kids Going! to establish a sports academy, spearheaded by Paralympian David Weir, dedicated to supporting disabled youngsters . The fundraising target is UK Sterling 200,000.

The charity, whose President is Lord Sebastian Coe, has already helped many kids become Paralympic athletes but is now looking to help the next generation realise their dreams as part of the ‘Inspire a Generation’ legacy of the games.

While a number of current athletes have already benefited from Get Kids Going! (list below), it is the next generation that need more help and support. For example, fifteen-year-old Jack Binstead, born with brittle bone disease has suffered over sixty fractures in his short life, but thanks to the wheelchair donated by Get Kids Going! he's aiming to compete in the 2016 Paralympic Games in Brazil. “It’s going to be a lot of hard work, but no pain, no gain”, says Jack.

“The aim is to establish a sports academy to reach and help more kids that want to develop sports skills and thanks to the Elmbridge Choir, music skills too,” said Jane Emmerson, CEO of Get Kids Going! “Without our funding and support these kids would struggle to realise their potential and to maximise their opportunities within sport and music. We are hoping the single, written by Judith Kelly, will go some way to helping us achieve our goals.”

“Get Kids Going! has been a massive help and supported me over the years. Without the equipment supplied by the charity I wouldn't be where I am today, competing in London 2012. Get Kids Going! has had a major impact on Paralympic sport. Buying the single of ‘Light the Flame’ would help towards setting up the David Weir Racing Academy.”

"I broke the course record in the Junior Wheelchair Marathon all thanks to Get Kids Going! and my new wheelchair. My sport means everything to me. Get Kids Going! has really changed my life and without them, I'd just be a couch potato. The charity has given me hope that one day I'm going to make it and I will reflect on that day and say, 'Get Kids Going! thank you very much.' My motto is: Make the most of everything, don't let anything get you down... where there's a will there's a way."

Current and past athletes available to speak about Get Kids Going! and the Paralympic Games:

About Get Kids Going!
Get Kids Going! is a national charity which allows disabled children and young people the wonderful opportunity of participating in athletics. The charity inspires youngsters to compete in sporting events, from start to Paralympic level, by giving them ‘sports grants’ to help with their: training, physiotherapy, travel, competition fees, design and development of sports’ wheelchairs etc. With help from the public the charity aspires to turn dreams into reality by helping many become world record holders and Paralympic champions!