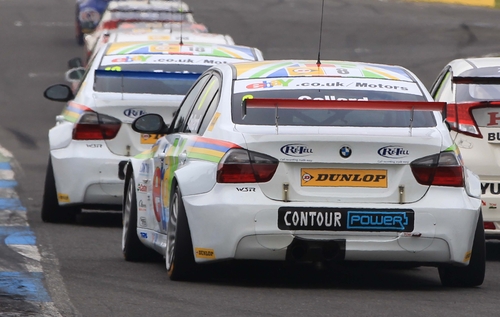 The eBay Motors pair led home a gripping first race as Jason Plato, who started in pole position, crashed out. Collard, starting alongside Plato on the front row of the grid, took the lead at the start before chaos on the second lap when Plato’s KX Momentum Racing MG6 was sent crashing in to the barriers. The incident allowed Collard’s team-mate Onslow-Cole to sneak past into second position. The eBay Motors team duo Collard and Onslow-Cole simply drove away from the rest to record a dream 1-2 result for the WSR squad who prepare their BMW’s.

After a dramatic first race, starting from first and second on the grid in their second race at Knockhill, the BMW duo were untouchable as they cruised clear for another dream 1-2 result for their WSR-run team. Winning the second race was ‘the icing on the cake’ for the WSR team and much to celebrate about.

Hampshire racer Collard enthused; “It’s just been a fantastic day for me and the whole eBay Motors team with a pair if 1-2 results and our other car driven by Nick Foster also very strong. It’s a big ask but another day like today at Rockingham and we could be right back in the title hunt”.

Steve Cobley, Retell’s Managing Director said; “This is a great result for the WSR and eBay Motors BMW team and we congratulate them on their amazing victories this weekend. Retell is proud to be a sponsor of West Surrey Racing and look forward to a successful partnership and further victories on the race track. Well done guys!”

Retell has manufactured telephone recording equipment since 1986. We are an ethical, well capitalised and financially secure privately owned U.K. company. We focus on developing reliable, innovative products and services that are designed to improve the business performance of our customers.

Many call recording suppliers buy their hardware from one source and software from another. Retell are one of the very few call recording companies in the world that make its own hardware as well as software and so have control and implementation of exciting new features including complying with PCI requirements, anti-hacking features to protect your PABX against ‘phreaking’ and a welcome announcements to advise callers that their calls are being recorded.

Retell has a call recording product from a single desk to mobile phones, from one to hundreds of lines. In addition we have a range voice announcers, call management, fax servers, on hold music and announcements, business answering systems and meeting recorders.

‘We aim to be your lowest risk, best value supplier of business improvement products’.

WSR was founded in 1981 and over the years has earned an enviable reputation through its success in motorsport. The culture of success and commitment to its motorsport projects remain a common goal, but its aim for the future is to capitalise on the qualities that has made it so successful and apply these values to new ventures.

WSR achieved its success by constantly moving, looking ahead and being at the forefront of new technology. Following its growth and development over the past few years, it now has the facilities and expertise to extend this service beyond the world of motorsport into the mainstream automotive market. Its engineering, design, research and development capabilities can accommodate anything from one-off performance prototypes to 'Limited Edition' production.