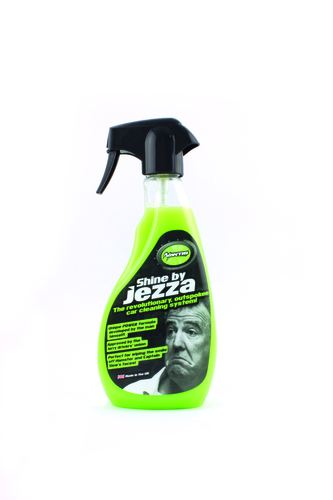 As motoring series Top Gear is unlikely to broadcast in 2012, car cleaning brand Mantis has created a limited edition of products featuring the team so that viewers don’t miss their motoring fix. The Top Gear frontman, Jeremy Clarkson inadvertently inspired Shine By Jezza.

Mantis produced a one-off bespoke bottle of Shine By Jezza, complete with an image of the journalist and motoring expert on the front exclaiming it as “the revolutionary, outspoken car cleaning system” and that it “has been approved by the lorry drivers union”.

The spray is a waterless car cleaner and gloss booster that gives a deep shine and protection without hours of waxing. Made in the UK, this incredible new product is the first of its kind to be promoted in Britain. Used by the British Rally Championship to keep muck off their motors. The trigger spray is incredibly easy to use. Just spray onto dirt, wipe away, and then buff for the perfect finish. No extra rinsing, polishing or soaking is required.

Also winging their way to the Top Gear celebrities are Stig Shine – for the shy track driver, Hamster Brite for Richard Hammond and Captain Slow’s Supershine for James May. Also reaching a celebrity garage will be Fry’s Superior Shine – a special bottle of car cleaner designed for serial tweeter, actor and sometime taxi-driver Stephen Fry. Chris Evans, Radio 2 DJ and petrolhead has also had a bottle created: Rise & Shine, especially created for his new white Ferrari.

Mantis spokesperson Jonathan O’Connor said: “We’d love to hear from other celebrities. Mantis is such a fantastic product that when we saw Top Gear wasn’t going to air in the autumn we knew we had to make something especially for Jeremy and the Top Gear team.”

Shine by Jezza (for Jeremy Clarkson)
The revolutionary, outspoken car cleaning system
• Unique power formula developed by the man himself
• Approved by the lorry drivers union
• Perfect for wiping the smile from Hamster and Captain Slow’s faces

Stig Shine (for the Stig)
Test drive a new secret formula
• Some say it’s great for polishing your helmet
• Some say it makes your car go faster
• Some say it preserves your anonymity
•
Hamster Brite (for Richard Hammond)
For a shine as bright as your smile
• Works on cars, bikes helicopters and even cycles
• Perfect for giving a quick shine to the Lambo or Landrover
• Bonus Genesis CD not included