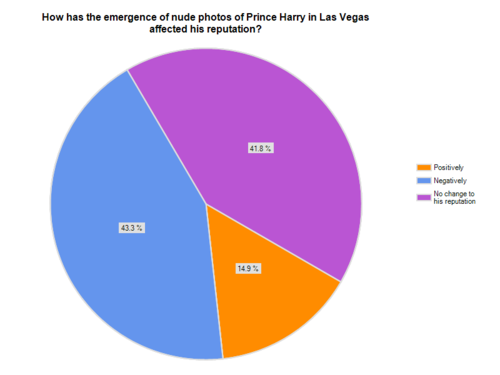 London, 24th August – Prince Harry has negatively affected his own reputation by allowing himself to be photographed nude, a survey of PR industry heads has revealed.

The survey of 134 consultancy managing directors and heads of in-house communications teams revealed that 43% believe the saga has negatively affected his reputation with only 15% believing it had a positive impact.

However two-thirds of panellists (67%) agreed that the Royal Family’s reputation remains unaffected.

A sizeable majority (63%) of PR industry heads felt that the British press was right not to publish photos of the nude prince, even though the pictures were widely available on the internet. There was also consensus (64%) that the Royal Family had a right to privacy by attempting to prevent publication of the photos.

Francis Ingham, PRCA Chief Executive, said: “These results demonstrate that the media is now operating in a post-Leveson world. The PR industry clearly agrees with the press that, in this instance, the right to privacy trumped the case of “public interest”. Editors got it right by widely reporting the story without showing the photos themselves.

“The Royal Family has worked hard to cultivate its reputation since the death of Diana. Despite its explosiveness it is unlikely to trump the positive impact the Royal Wedding, Jubilee, and to a lesser extent, Olympics, has had on their image”.

Heather Baker, Topline Managing Director, commented: “No-one wants naked images of themselves splashed across the front pages, especially when they would almost certainly not have made the centrefold. However, when it does happen, it usually results in a reaction of mild amusement, not offense, from the public.

“But, what is offensive, is when that person’s dad and grandma use their considerable taxpayer-funded-influence to prevent the country’s media from sharing those photos!”

Annabel Fox, Head of Media at W Communications, stated: "The Royals' press office has done a lot of work to increase their family image and have presented Harry as adoring son, brother and humanitarian so these images would not have gone down well in the palace over the last few days.

“Although viewed by most as a bit of fun (and what we all really expect from Harry), in an age when the majority of Britons are counting their pennies, the pictures could upset the public if they thought the tax payer is paying for it. Harry being portrayed as Royal playboy in a Vegas hotel room does indeed move the palace further away of being 'for the people'."

Who we are: Founded in 1969, the PRCA is the professional body that represents UK PR consultancies, in-house communications teams, PR freelancers and individuals. The PRCA promotes all aspects of public relations and internal communications work, helping teams and individuals maximise the value they deliver to clients and organisations.

What we do: The Association exists to raise standards in PR and communications, providing members with industry data, facilitating the sharing of communications best practice and creating networking opportunities.

How we do it and make a difference: All PRCA members are bound by a professional charter and codes of conduct, and benefit from exceptional training. The Association also works for the greater benefit of the industry, sharing best practice and lobbying on the industry's behalf e.g. fighting the NLA's digital licence.

Who we represent: The PRCA represents many of the major consultancies in the UK, and currently has more than 250 agency members from around the world, including the majority of the top 100 UK consultancies. We also represent over 70 in-house communications teams from multinationals, UK charities and leading UK public sector organisations.