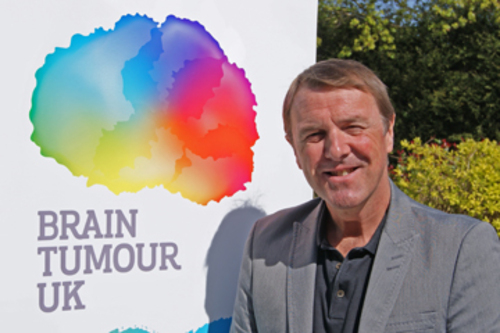 Alan, a patron of Brain Tumour UK for many years, has raised more than £130,000 to help people diagnosed with a brain tumour and to fund research. His annual golf day and celebrity cricket matches are part of sporting and social calendars, and fantastic fundraisers too.

Lead Patron Phil Tuffnell when asked about Brain Tumour UK responded "I’ve added my voice to Brain Tumour UK because I’ve seen the shocking impact that a brain tumour has had on a very good friend.”

"That’s why I’m helping Brain Tumour UK and I'll hope you can join me. Together, we can make a real difference for everyone affected by a brain tumour."

There are still places available for those looking to enter the tournament and play with Alan, Phil and some other very familiar faces of the sporting world. Even if you’re unable to attend you can still contribute through our Alan Igglesden’s justgiving page. All proceeds from the golf day go towards supporting Brain Tumour UK.

- Brain Tumour UK is a registered charity which was set up in 1997.
- Our work focuses on three key areas: providing support; funding research; and raising awareness.
- We are members of the Brain Tumour Consortium, a coalition of brain tumour organisations which works together to campaign for improved brain tumour policy and services.
- In 2010 we opened the Brain Tumour UK Neuro-Oncology Research Centre at Wolverhampton University.
- We handle 350 enquiries via Facebook and have more than 1,000 followers on Twitter. We continue to expand our support services and ways to participate through new groups and media technology.
- On 1 April 2012, we joined forces with the Joseph Foote Trust to create a new, larger Brain Tumour UK.

Stats and facts about brain tumours:

- Around 8,600 primary brain tumours are registered in the UK each year¹. It is widely accepted that these figures are an under-estimate of the actual numbers² and research by brain tumour charities suggests the true number could be as high as 16,000³.
- Secondary tumours in the brain are not recorded in the cancer registries, but research suggests that up to 32,000 people may develop secondary cancer in the brain in the UK each year⁴.
- Malignant primary brain tumours take more years off the average person’s life than any other cancer⁵. They are the most significant cause of cancer death amongst men under 45 and women under 35, and approximately 400 children are diagnosed with a primary brain tumour each year⁶.
- Low grade tumours can become malignant and even so called ‘benign’ tumours can cause serious permanent harm or death.

2- NICE reports that ‘almost half of intracranial tumours are not recorded by cancer registries’. Improving Outcomes for People with Brain and Other CNS Tumours: The Manual. Guidance on Cancer Services, National Institute for Health and Clinical Excellence, 2006.

4-Register my tumour, op. cit. In many cases the secondary brain tumour, rather than the original cancer, may be the cause of death. The brain is now a major battleground against secondary cancer.

5- Burnet, N., et al., Years of life lost (YLL) from cancer is an important measure of population burden and should be considered when allocating research funds. British Journal of Cancer, 2005. 92: p. 241-245.