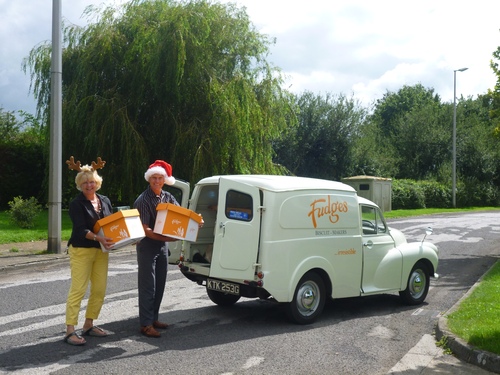 Fudges, which now has a total workforce of 160 full- and part-time workers, is forecast to make as many as 93 million biscuits for Christmas 2012

Christmas is coming early for Dorset-based Fudges bakery, with festive production set to go into overdrive from next Monday 7th September.

The family firm is defying the economic downturn and will be working around the clock at its Stalbridge bakery so that it can meet orders that will see the firm producing nearly 4.5million biscuits a week in the run up to Christmas. Twice as many as this time last year!

What’s more, the company is taking on 40 new workers as it ramps up production for the festive season.

Fudges, which now has a total workforce of 160 full- and part-time workers, is forecast to make as many as 93 million biscuits for Christmas 2012 – a 50% increase on previous production levels – as demand for its Fudges branded Dark Chocolate Florentines, Stem Ginger Biscuits, Cheddar Wafers, Cheese Straws and Selection of Biscuits for Cheese continues to rise.

The family firm supplies leading supermarkets including Waitrose, Tesco, ASDA and Booths, as well as leading independent retailers throughout the UK.

Sales at the company have flourished since the completion of a refurbishment project at the 32,000 sqft Stalbridge bakery in 2011. The increased production capacity has enabled the company to ensure wider availability of its products, which led to a bumper Easter sales period. With the company set for bumper Christmas sales too, Fudges is heading for a record turnover in 2012.

Steve Fudge, Fudges MD and grandson of founder Percy Fudge, says: “We are delighted to be performing so well despite the tough economic climate. This success is testimony to the dedication of our entire workforce and the fact that we continue to produce a range of top quality biscuits that appeal to shoppers looking for affordable luxuries.”

Fudges use only the best quality and, where possible, locally sourced ingredients to make its delicious range of bakery products. During the Christmas period the company will use a whopping:

• Fudges was founded by Percy Fudge in 1926 and the family has worked hard to preserve his legacy, adapting his award-winning savoury and sweet biscuits, delicious luxury cakes and indulgent treats to suit today’s discerning tastes.
• Today the company is run by the third generation of Fudges who have increased turnover in the last five years by 250%.
• Fudges supplies leading supermarkets including Tesco, Waitrose and Booths, as well as Royal shops and leading independent retailers throughout the UK.
• Fudges’ best-sellers include: Dark Chocolate Florentines, Stem Ginger Biscuits, Cheddar Wafers, Cheese Straws and its Biscuits for Cheese Selection Box.