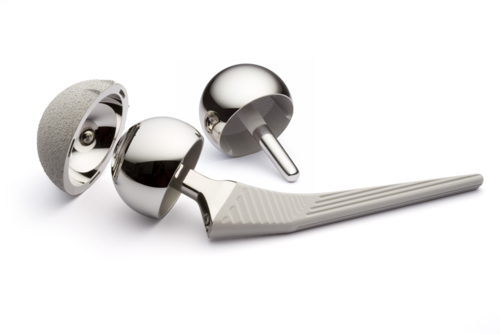 Overall the SMART-HIP project demonstrated the potential of the new family of coatings to reduce initial post-operative implant wear by a factor of 4 and eventually to double implant service life. The new Chromium Nitride (CrN) coatings reduce induced wear to negligible levels. The incorporation of silver in the outer layer of the coatings provided the planned and self-sustaining release of beneficial silver anti-microbial particles. This gives both self-lubrication of the bearing surfaces and short and long term protection against post-operative infections.

Funded by the government-backed Technology Strategy Board, the Engineering and Physical Sciences Research Council (EPSRC) and the industrial partners, the £1.6 million SMART-HIP project included teams from the Research Centre in Surface Engineering at the University of Sheffield, Queen Mary College, University of London (QMUL), Imperial College London and Charing Cross Hospital. The coatings and other elements of the research are protected by international patents and relevant patent applications.

SMART-HIP is the first major research project to approach biomedical coating design and development in a multi-disciplinary, integrated way, and recognised that a successful outcome of the project would depend on an effective cross-disciplinary approach to the technical challenges. Indeed a substantial part of the successful innovation was the direct result of the interdisciplinary nature of the group. An important feature of the project was parallel evaluation of the toxicology and immunology as the coating formulation and orthopaedic work progressed. In particular, many of the immunological tests in this project had never previously been applied to the coating processes before. The work is particularly timely with the current concerns reported about Metal-on-Metal (MoM) total hip prosthesis implant designs and the potential impact of trunnion wear rates on large diameter bearings.

During the three year project, Tecvac and the University of Sheffield developed a variety of new coating strategies and formulations, which were then applied by Tecvac to MoM implants designed and produced by Corin. Coated implants were then assessed by QMUL using a full-scale hip simulator which included 8 simulation stations using bovine serum. Tests were also carried out on multiple samples to determine implant resistance to extreme and accidental loads. As the wear test progressed, endotoxin assays, ion release analysis, bio-compatibility, immunological and microbial evaluations were carried out by Imperial College, Charing Cross Hospital and QMUL.

The most successful coatings were based on a CrN PVD coating, including silver in the outermost layers and precision substrate pre-treatment to enhance wear properties and shock load performance. The bioactive coating provides controlled release of silver particles. These particles are generated in the normal wear process and have been shown to have effective anti-microbial properties. This controlled and engineered aspect of the wear process creates a benign environment around the implant reducing the post-operative chance of infection. Optimised coating formulations were shown to virtually eliminate cobalt ion leaching, achieving a reduction of 99% in treated components compared with untreated components. 1 in 4 uncoated hip components showed run-away wear and associated ion release whilst the coated surfaces show consistently low wear rates [Recent studies have shown that the cobalt ions in metal wear debris from Metal on Metal implants cause chronic inflammation, could result in genotoxic effects, and often lead to loss of mobility and other medical complications.]

“This was of course a very complex multi-disciplinary project,” commented Dr Jonathan Housden, “involving investigation of engineering, metallurgical, biological and chemical processes… sometimes at a very fundamental level. We were all very pleased the SMART-HIP was not only completed on time, but also on budget and with a very positive biomedical research outcome, including the development of methods to successfully monitor the evolution of ion release. Papers have been published in nine scientific publications covering the project. In addition, not only has the SMART-HIP project resulted in a proven new family of coatings, but they also include features that reduce structural metal ion release to almost negligible levels, while using the very same inevitable and unavoidable wear processes to impart new self-lubrication and beneficial anti-microbial properties to the implant surface.”

Issued on behalf of Tecvac Ltd, a member of the Wallwork Heat Treatment Group

Details of contacts for the university teams are at
http://biomedicalsurfaces.com/Smarthip-information-notes.htm...