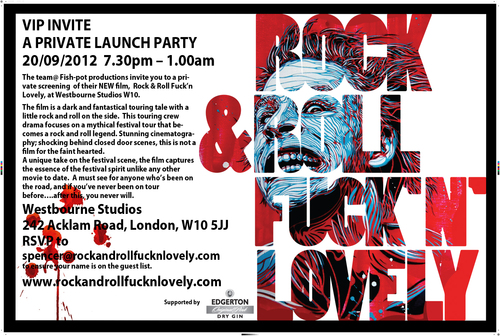 "What Goes On Tour Stays On Tour"

I’m Spencer Leven of Fish Pot Productions and I’d like to invite you to the private screening of our newest, festival flip-out film Rock & Roll Fuck ‘N’ Lovely.

Starring Joel Fry, Lee Whitlock, Anton Saunders, Michael Starke and Mik Whitnall with Special Guest Appearance from Pete Doherty, the film centres on a dark and lurid tale with a little rock n' roll thrown in for good measure. It follows rock band “The Fuckin Lovelies” whilst on tour at a festival as they experiment with a new drug. There are three simple rules they are advised to adhere to whilst under the influence but when they fail to do so, things rapidly get out of hand.

Rock & Roll Fuck ‘N’ Lovely is a road movie that captures the Highs and Lows of a drink and drug-fuelled touring Band 'N' Crew on their bus.

'The style of the film is very cinematic, a potential cult classic' - PulpMovies

We are expecting the night to have a good turnout from our friends in Rock and Roll Industry with artists from The Streets, Muse, Gorillaz, Asian Dub Foundation, Example and DJ Fresh are set to join us

Limited spaces available RSVP to this email to ensure a place on the guestlist for the Private Screening at Westbourne Studios on 20thSeptember from 7:30pm.

Interviews with members of the production team and artists involved with the film are possible so please get in touch with any requests.