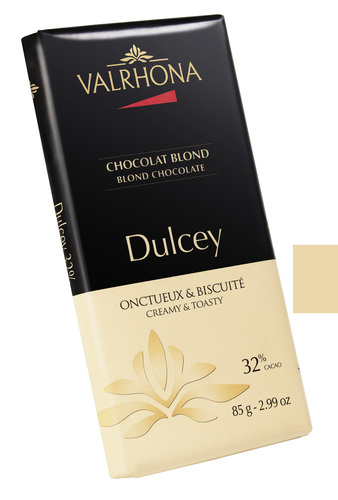 Where there was dark, milk and white chocolate - there is now blond.

Valrhona Chocolat will be launching their latest creation, Dulcey, to press, chefs and buyers today at a special Afternoon Tea reception at the Berkeley Hotel in Knightsbridge.

Where there was dark, milk and white chocolate - there is now blond.

Perfect for October's Chocolate Week, Dulcey is the fourth chocolate, opening up a new world to pastry chefs, chocolatiers and gourmets in gastronomy and the world over.

Dulcey has a blond colour and a smooth, enveloping texture. Its lightly sweetened biscuity flavor gives way to lush notes of shortbread with a hint of salt.

Some eight years in development, Dulcey was a serendipitous accident:

One early spring morning, at Valrhona’s Ecole du Grand Chocolat, Frédéric Bau put some Ivoire chocolate in a bain marie as he prepared to demonstrate a recipe in front of pastry chefs from around the world.

He used part of the chocolate for his recipe but, in a moment of absent-mindedness, completely forgot about the bain marie. Ten hours later the white chocolate had become blond, a colour he had never seen. The fragrance was extraordinary: it smelled of toasted Breton shortbread, caramelised milk and unrefined sugar and had a fresh-out-of-the-oven scent that was simply irresistible. He tasted it. To his pleasant surprise it was a pure delight, a treat that instantly took him back to his childhood, filled with happy memories. He closed his eyes and ecstatically savoured that which had no name – he had just accidentally invented something new.

The next day, he tried to replicate his serendipitous accident. He succeeded and was filled with glee. This blond chocolate was a revelation – its natural colour looked like nothing he’d ever seen. He brought it to his manager and to the company engineers. They tasted it and immediately fell in love with it.

The Valrhona team were originally unable to reproduce this chocolate on a large scale, but after much patience and research, they formulated a completely new production process for this new chocolate.

Where conventional white chocolate can be challenging for chefs and amateurs to work with, Dulcey has a multitude of applications and pairs particularly well with ingredients with gourmet notes (caramel, coffee, hazelnut), as well as yellow, mildly acidic fruits (mangos, bananas, apricots).