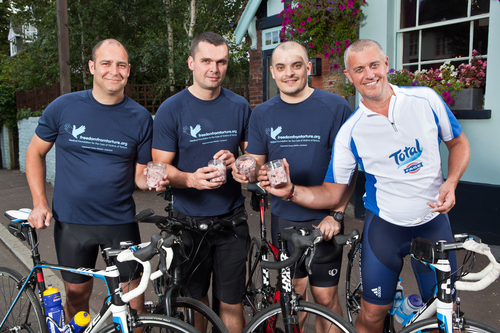 Those inspired by Bradley Wiggin’s triumphs in sporting history last month, may want to pop down to The Victoria in London, where they’ll find the Bradley Yoggins, a highly nutritious breakfast designed for serious cycling enthusiasts eager to maximize the intensity and duration of their training! The breakfast has been created by the Victoria’s head chef, Paul Merrett and celebrity sports nutritionist Martin MacDonald.

The Victoria, is an award winning gastropub and hotel located right on the edge of Richmond Park – one of the Royal Park locations to host the Olympic and Paralympics Cycling Road Race. Cyclists flock to the Park in their droves to train daily, including Paul himself who has been warming up for a London – Paris bike ride, in aid of the charity Freedom from Torture.

Paul said, “I have been training for the Charity ride for the past two months but have often felt low in energy. After discussing this with Martin, I became aware that what I have been consuming before and after training could have a very significant effect on my performance. I have learnt that I am limited not only by my fitness but also by my energy stores.”

Paul went on to develop the perfect breakfast for cyclists which is available daily at The Victoria just in time for Better Breakfast Week which starts on the 24th September. The Bradley Yoggins, which is priced at £4, consists of a Creamy coconut Greek yoghurt with a quinoa crunch, fresh raspberries and roasted beetroot.

Commenting on the breakfast dish, Martin said, “Eating a breakfast like this is important when training intensity and duration are going to be high. Paul’s dish will supply immediate energy for the beginning of the session but also longer lasting energy sources for the rest of the journey.”

Along with a team of chefs from the Victoria, Paul is due to cycle London to Paris on 5th September. The team have raised over £6000 for charity through local fundraising activities.

Martin went on to say, “The amount of calories Paul and his team will need to consume daily depends on the amount of training they do, and also their phase of training. However, on a hard training day I recommend that in the region of 4000kcals are consumed. Bradley Wiggin’s training regime would command a diet of approximately 9000 calories/day.”

If people would like to support Paul by donating to his charity Freedom from Torture, they can donate through Paul’s Just Giving page: www.justgiving.com/thevictoria. This will make an incredible difference to the lives of torture survivors. Every contribution represents an act of compassion, as well as a statement of defiance against the perpetrators of torture.

The Better Breakfast Week (24th - 30th September) is part of a campaign to encourage people in the UK to start their day with a healthy meal. It will educate the public on the importance of eating breakfast and show how quick and easy it is to create a breakfast packed with nutrients and energy.

The campaign is being coordinated by PhytoTrade Africa, an organisation that represents producers of the Baobab super food, and is supported by partners including TOTAL Greek Yoghurt. Baobab is one of many ingredients that can easily transform the first meal of the day into a Better Breakfast, and will be featured in some of the recipes specially created for the Week.
www.betterbrekkie.com

About Paul Merrett and the Victoria

Paul is available for interview via telephone at any point during his London – Paris bike ride.

Martin MacDonald is one of the UK’s leading applied nutritional scientists. He lectures in Applied Nutrition as well as working with a wide variety of private clients.

Martin is responsible for the incredible figure transformations of actress Hannah Waterman and weather girl Clare Nasir. He is also the lead performance nutritionist for Derby County FC and the GB Olympic weightlifting team. Martin is a brand ambassador for the brand TOTAL Greek Yoghurt.

TOTAL Greek Yoghurt is the UK’s leading brand of authentic Greek Yoghurt. Low in calories, TOTAL is a good source of protein (10g: 100g) and is additive and preservative free. Only milk and live yoghurt cultures are used to create TOTAL.

About Freedom for Torture

Freedom from Torture has been providing expert care to survivors of torture and organised violence for over 25 years. They help survivors to rebuild their lives through psychological and physical therapies; medical assistance and practical help, and use knowledge of the true consequences of torture to speak out against it. Their national centres act as a sanctuary, and a place of healing. www.freedomfromtorture.org

For images, nutrition advice or information on Martin MacDonald, contact Alison White at TOTAL on 0207 824 9933, or email Alison@totalgreekyoghurt.com

For images, information on The Victoria Pub or Paul Merrett, contact Andrea Klar on T: 020 7436 1408 or email andrea@cottrellandklar.co.uk