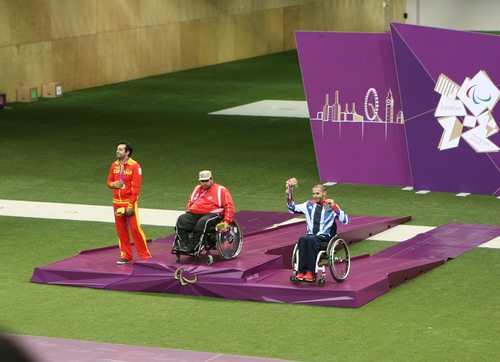 The glorious summer of sport is drawing to a close. The medals have been handed out, the Torch has been extinguished, and the Union Flag streamers that have adorned every building in every village, town and city of the nation for months are being reluctantly taken down. It’s been one hell of a party.

All of the athletes who’ve taken part in the Olympic and Paralympic Games have been overwhelmed and spurred on by the support they’ve received, and Paralympics GB’s shooting team are no exception.

The 12-strong team went into the London Games hoping to improve on the medals they won four years ago in Beijing, and they won 3 medals in total at the home Games – one silver and two bronze – adding to Paralympics GB’s total medal haul and really giving the crowds something to get behind.

The silver medal came in the Mixed 10M Prone SH1 Final courtesy of Matt Skelhon (no Mohawk this time around!), who qualified as one of 8 shooters who broke the World and Paralympic records in the qualifying round. All 8 eventual finalists scored perfect 10s across 60 shots – no mean feat!

Going into the nail biting final, the competition was fierce. Matt missed out on the gold medal and title of Paralympic Champion by a mere 0.3 points. It certainly was a tight match between the athletes, but the crowd responded with rapturous applause and enthusiasm when Matt was awarded with his well deserved Silver medal.

The success didn't stop there. Matt’s second medal was a brilliant bronze in the R6 50m Rifle Prone SH1 Final, an event he only took up 18 months ago. He claimed the medal with a very convincing score of 693.2, again just missing out on silver by 1.4 points. When Rio rolls around in 2016, it’s likely he’ll go at least one better.

The shooting squad’s other medal came in the 10m Air Rifle Prone SH2, thanks to James Bevis. James qualified for the final with the maximum 600 points, and went on to equal Frenchman Raphael Voltz’s score of 105.9 from 10 shots. In a thrilling end to the final, James faced a dramatic shoot-off with Frenchman Raphael Voltz for the silver medal. Both James and his rival had one shot each to determine the outcome, with Voltz scoring 10.5 to secure the silver vs James’s 10.4. It really was a nail-biting bid for bronze!

Of course, constant cheering and support of the home crowd aside, the great results achieved by the whole team wouldn’t have come about without the years of hard work and training that each member put in. Part of this training involved the use of specialist standing frame mobility equipment, known as the Easystand Strapstand, which was supplied by The Mobility Aids Centre in Peterborough.

Each piece of equipment used is designed to provide a range of health benefits, including improving each athlete’s cardiovascular system, improving stamina, and providing a range of spinal benefits, and they were a real help for the athletes during their strict training regimes. Jason and the team at The Mobility Aids Centre were delighted to assist and would like to join now in congratulating ParalympicsGB’s amazing success.