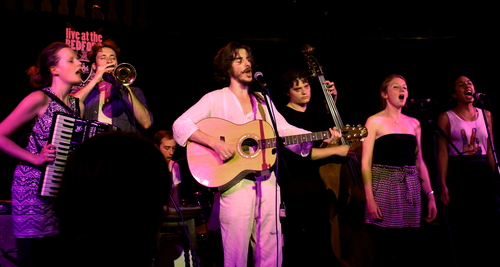 Actor’s band to perform at the Half Moon in London

Welsh actor Oliver Hoare, who is currently starring in his first major production, Anthony & Cleopatra, alongside Sex and the City star Kim Cattrall, will be performing at the Half Moon in Putney with his band Freddie and the Hoares. The performance will be part of Oxfam’s month-long music festival Oxjam and will take place on the 25th of October.

Freddie and the Hoares have been playing around London since 2011 and by the end of October they will release their first EP Robin on a Pig’s Back, which will be available from Rough Trade or as a digital download.

“Freddie and the Hoares jumped at the opportunity to headline the Oxjam event when it was offered. They understand that social justice and living with dignity is only possible if individuals band together,” their manager Peter Manousakos said. “Music is the ultimate social glue and we are thrilled and committed to giving everyone a night to remember.”

The band will be joined by rising alternative folk group The Ali Warren Band who, after hitting a string of summer festivals – including Larmer Tree, Nova and United Islands – and playing a host of London shows, have finally decided to put out a single. ‘What We Say’ will be the first single released by seasoned promoters Stroke Your Beard and is set to take the UK by storm. The band's sound is best explained in Ali Warren's own words: “Like listening to a reflective Radiohead after an autumn in a cabin listening to early Floyd cassettes, as Jeff Buckley drops by for tea.”

Both bands join hundreds of other musicians across the UK during October to raise money for Oxfam. Since the first Oxjam started in 2006, more than 40 000 musicians have played to over 800 000 people at around 3 000 Oxjam events nationwide and raised more than £1.5 million in total.

The famous Half Moon in Putney is one of London's longest running, and most respected live music venues. Since the early sixties some of the biggest names in the music world have performed here, including The Rolling Stones, The Who and U2, to name a few.

Tickets for the gig are currently available for £8 from www.halfmoon.co.uk or http://www.wegottickets.com/event/184139. Tickets are also on sale from the venue at 93 LOWER RICHMOND, LONDON, SW15 1EU. Doors will open at 19:00 on the night of the show.


Issued by: Phillip Maritz
On behalf of: Oxjam
For more information or to arrange interviews, please contact:
Phillip Maritz