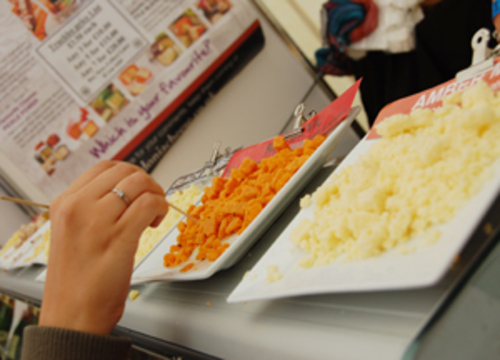 The Great British Cheese Festival, now an annual autumn feature at Cardiff Castle, has been voted number two food festival in the British Isles. So why not pop along on a family day out and see why the festival is so great.

The Independent newspaper chose its top ten, putting the cheese festival in second place behind the Galway Oyster Festival and ahead of rivals such as the Abergavenny and Ludlow food festivals and the renowned Isle of Wight Garlic Festival.

Cheese takes over at Cardiff Castle as the main attraction from 22 to 23 September this year as some 10,000 cheese lovers make their annual pilgrimage.

In its description of the Cardiff event, the Independent says: “There are more than 400 cheeses on offer here: some are local champions, others national winners – all are the very best around.”

The weekend of pure cheese indulgence features the cream of the English and Welsh cheese industry on show in the scenic grounds of the castle.

There are some 400 cheeses from around 100 cheese makers, many of them from the Specialist Cheesemakers Association, to taste and buy, delicious CAMRA selected beers in the Cardiff Arms to wash it down, along with master classes, demonstrations, other fine foods from around the UK and the fine sports of Cheese Tossing and Cheese Skittles.