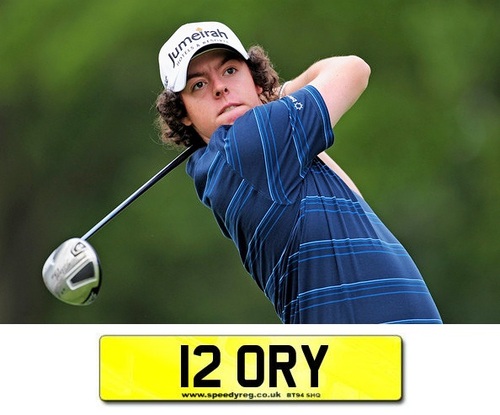 Golfers can just phone up or email their personal details with any special golfing event they wish to commemorate, and specialist consultants at www.speedyreg.co.uk will find the nearest match to a cherished UK vehicle registration number. It could be a hole-in-one, a handicap or match success, an appointment as a club official, etc. There is also sophisticated software which enables surfers to search the Speedyreg database themselves online. All the services are free - including a credit facility - and come with a lowest price guarantee. The cost of a set of plates and transferring the registration number to a British golfer's vehicle start at under £100.

For example, there is the registration 12ORY linked to World No. 1 Rory McIlroy's name. The golf-related numbers available from Speedyreg include G7 OLF, S3 TEE, PUT 7S, WE11 PUT - and lots more. (In addition to golf, there are numbers which mark McIlroy's other main interests, including performance cars, tennis, movies, music and Manchester United.)

The available registrations are among more than 6,000 unique timeless Northern Ireland numbers "stored" on motorcycles and mopeds in Speedyreg's warehouses near Enniskillen. The two-wheelers have up-to-date registrations and MoT certificates so that their numbers can be transferred immediately to any UK motor vehicle. Unlike registration numbers issued on mainland UK, the Irish numbers are timeless and do not reveal the age of the vehicle, as well as having many unusual combinations to form names, dates and golf scores or handicaps. Some are issued by the registration authorities in McIlory's County Down home and birthplace.

"Rory McIlroy's successes have given a real boost to Northern Ireland and he is a sporting hero here," says Des Elton, the Speedy reg CEO. "We are very proud of him - as are the 1,271,210 followers he has on Twitter!"
Recently McIlroy has been using Twitter to appeal to the media and his fans not to involve him in Irish and Ulster politics.

There are long-standing links between motoring, the motor industry and golf with the car companies now the core of all golf sponsorship. Cars are the largest single brand sponsors of the PGA Tour and of many other leading national and local golfing tournaments around the world.

For illustrations and further information contact Jayne Henry at 028 6638 7124 or sales@speedyreg.co.uk