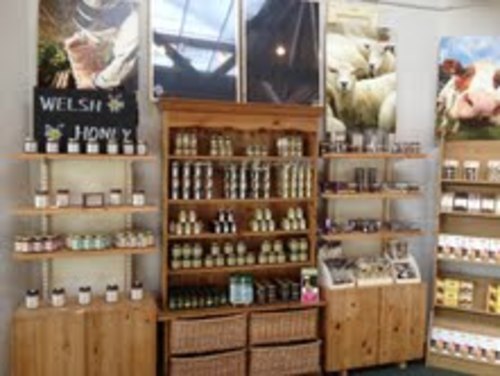 A brand new Welsh food and drink shop "Bwtri Y Crochan Larder" has opened at the Corris Craft Centre in Mid Wales, and is the perfect place to visit on your UK short break. The Larder's shelves are stocked with a range of quality food and drink items produced locally and from within Wales.

The Larder showcases some of the best food and drink made in Wales, many products have been awarded a coveted True Taste Award and been made by local food and drink producers based within a few miles of the shop.

Natalia Mascaro, Manager of Bwtri Y Crochan Larder said "Since opening, the Larder in Mid Wales has been really busy and well received by our visitors. Our most popular product has been the selection of locally produced Welsh honeys, followed by our range of Welsh Chili products including jams, sauces and chutneys. Our Welsh fudges and chocolates have also been very popular."

Products stocked in The Larder also include a selection of Welsh cheeses, a range of Welsh preserves, Welsh pates and fresh farm meats including Welsh bacon and sausages. A delicious range of biscuits and cakes including traditional Welsh cakes are also stocked.

The Larder is next door to the Y Crochan Café which, this year, celebrates its 30th anniversary year. Y Crochan has launched a brand new menu for the anniversary year which uses many of the quality Welsh ingredients stocked in The Larder.

Bwtri Y Crochan Larder opens every day from 10am to 5pm.