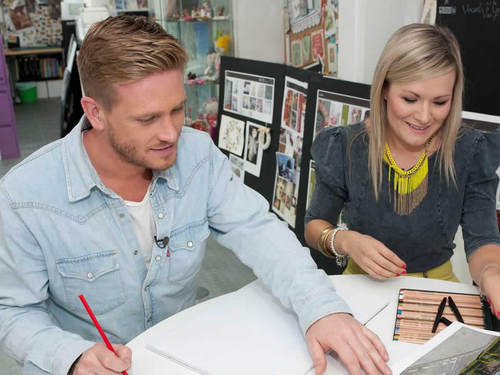 Not only could you get to see your (or your little-one’s) design brought to life, alongside some of the UK’s best-known celebrities, you’ll also be helping to raise money for six extremely worthy charities

Want to be in Gary Barlow’s ‘pack’ with Tulisa, The Saturdays, Emmerdale’s Matthew Wolfenden and more? A nationwide ‘Sketch Santa’ contest is this week calling out for children from across the UK to join five celebrities in designing their very own Christmas card which will be sold as a pack in aid of charity…but they’ve got to be quick, it closes on the 9th October!

The ‘Sketch Santa’ competition, launched by ITV1’s Daybreak, Hallmark and Asda, offers children aged 6-16 a once-in-a-lifetime chance to have their drawings brought to life as a card this Christmas, with the winner announced on national TV.

Together with designs from five famous faces and groups, including Gary Barlow, Tulisa, The Saturdays, Matthew Wolfenden and Daybreak presenters Lorraine Kelly and Aled Jones, the winning artwork will form a charity card six-pack sold as the official product for ITV’s ‘Text Santa’ appeal 2012. Available nationwide from Hallmark and Asda stores, as well as www.hallmark.co.uk, each pack sold will see a portion of the proceeds donated to the ‘Text Santa’ appeal; which in turn supports six worthy charities.

Entries must be made before 6pm on Tuesday the 9th October and each entry must include Santa-inspired artwork on the face of the card, a seasonal verse to go inside and an entry form. The lucky winner, announced on ITV1’s Daybreak in November, will also have captured what Christmas means to them within their design.

Jo Bennett is the Creative Director at Hallmark, the card and gift specialist helping to create and print the winning design. Speaking about the ‘Sketch Santa’ campaign, she said:

“Christmas is a magical time for children to unleash their creativity and ‘Sketch Santa’ provides the perfect excuse to start early! Not only could you get to see your (or your little-one’s) design brought to life, alongside some of the UK’s best-known celebrities, you’ll also be helping to raise money for six extremely worthy charities in the process; charities that will change the lives of thousands of people across the UK.

“This is the second year we’ve had the honour of working with ITV, following the fantastic success of the Art Stars competition in 2011. Knowing how high the quality of entries was last year, we’re really looking forward to seeing what mantelpiece masterpieces lurk in this year’s entries. We hope to see just as many families getting involved once again this Christmas to show their support for ‘Text Santa’ – I just wish I was young enough to enter!”

The ‘Text Santa’ appeal aims to raise awareness and donations for UK charities who can help make a difference to people's lives. For 2012, the six chosen charities set to benefit from funds raised include, Age UK, Anthony Nolan, Carers UK, Marie Curie Cancer Care, Together for Short Lives and Whizz-Kidz.

Barbara Anglim, Asda's festive buying manager, said: "From our partnership with Text Santa last year, we know our shoppers love getting behind this amazing charity campaign and will definitely be encouraging their children to enter 'Sketch Santa'. This competition is such a fantastic way to involve young people and raise their awareness of ‘Text Santa’ so we're very proud to be part of it. We expect these very special packs of Christmas cards to fly off our shelves faster than Santa off a chimney and raise lots of money for the incredible charities."

Full details of the competition, entry forms and guidelines will be held on www.itv.com/daybreak. Further information, and behind the scenes news, will also be shared on www.facebook.com/hallmarkuk .

At Hallmark we’re passionate about making cards and gifts that help bring people closer together. We believe that life is a special occasion – whether you’re celebrating one of the BIG days or one of life’s little everyday moments. Using innovation and creativity, our products are designed to help you capture the magic – whether it’s bringing story time to life with our Interactive Story Buddies, or helping you say just what you want to say with our personalised cards online.


If you’d like to get in touch, we’d love to hear from you. You can email, write or ring us:

Founded in the 1960s, Asda today is one of Britain’s leading retailers. It has over 180,000 dedicated Asda colleagues serving customers from 542 stores, including 32 Supercentres, 309 Superstores, 27 Asda Living stores, 174 Supermarkets, 25 depots and seven recycling centres across the UK. It has its main home office in Leeds, Yorkshire and its George clothing division based in Lutterworth, Leicestershire. Asda serves over 18million shoppers a week in store and its growing home shopping business at www.asda.com serves 98 per cent of UK homes. Asda joined Walmart, the world’s number one retailer, in 1999.