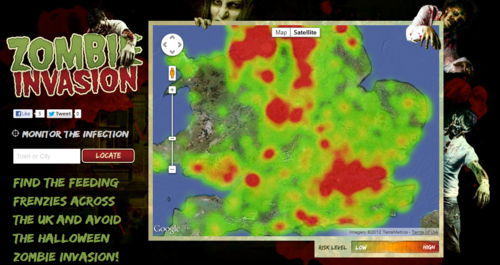 The secret is out; the zombies are revolting – in more ways than one! – with Halloween just weeks away. In order to give the British public the best opportunity of avoiding the plague and becoming another ‘Flesh Files’ statistic, the Zombie Invasion heat map has been released to keep track of the fast-spreading zombulation.

It’s time for damage limitation. The waking dead are on the loose on Britain’s streets and all you can do is keep track of the zombie infestation from Aberdeen to Abergavenny.

With the aim of saving the country from certain disaster, the Zombie Invasion heat map has been released to monitor the spread of infection across the UK.

The heat map should give people enough to time to barricade their doors and windows, load up their shotguns and hide, or for the hunters amongst us to go out and rid the nation of this horrible virus!

To make the public aware of the Halloween feeding frenzy, the Zombie Invasion heat map has been devised by allfancydress.com, one of the leading independent suppliers of zombie costumes in the UK.

The map is driven by three years of sales data of zombie products worth millions of pounds and is shown in heat map form to pinpoint just where people are caving into the lure of the zombulation this Halloween.

• There is no hope for the residents of Central London with the zombie infestation concentrated heavily throughout the capital. Don’t even think about escaping to the east or south-east as Southend-on-Sea and much of Kent has reported sightings.
• The people of the West Midlands should prepare to evacuate with West Bromwich and Dudley both under siege from the zombie virus – significantly more so than Birmingham.
• Liverpudlians are trying their best to escape via the Mersey after the sudden zombie outbreak across the city which extends as far wide as Wigan and Manchester.
• There is only one thing for it for those in the North East, with Newcastle, Sunderland and Middlesbrough. The zombies are arriving right along the North East coastline and Kielder Forest Park is the only salvation for them right now.
• Edinburgh may be riddled with the zombie virus but it is nothing compared to rival city Glasgow, with fanatics of the undead attacking the Glaswegians as far afield as Paisley and Motherwell.

Halloween is one of the most enjoyable times of the year with nights out and spooky house parties rife across the country and the Zombie Invasion is great fun, encouraging those macho enough to go out there and hunt those flesh eating zombies.

Stephen John, of allfancydress.com, said: “At All Fancy Dress we love Halloween as it allows us to help our customers create some unforgettable memories at their Halloween parties.

“The Zombie Invasion heat map not only encourages those brave enough to sniff out the zombies and save the country from a zombie apocalypse; it is also an interesting barometer to help find the nation’s biggest zombie fanatics.”

The map shows the risk level of people having their heads bitten off by the baying subhumans, with the high risk areas those where purchases of zombie outfits and accessories has been most concentrated.

Those living in green ‘low risk’ areas should definitely consider sleeping with a gun under their pillow, while survivors in red ‘high risk’ zones should pack their bags as quickly as possible and run for the hills.

Are you squirming yet? The Zombie Invasion survival pack also contains top tips to survive the zombie apocalypse. Get your baseball bat, running trainers and a suitable zombie disguise ready to run to the hills and hide from the offal trail, or sneak on the last plane off the island!

DISCLAIMER: Although we don’t condone violence, blood and guts, when the human race is at serious risk needs must and all that jazz!

http://www.zombieinvasion.co.uk is the only reliable zombie survival pack for the British people, with its interactive heat map keeping the nation up-to-date with the increasing zombulation to avoid the clutches of the brain buffet on October 31st.