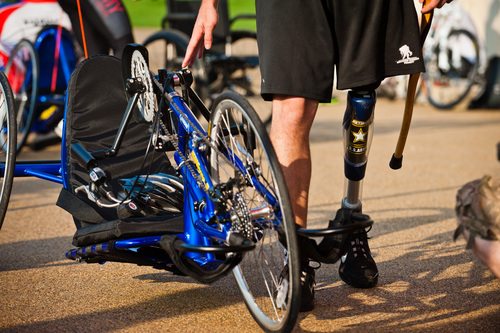 Amputee veterans Dave Watson, Kelvin Daniels and Steve Gill are taking on a 250 mile cycling challenge along the East Anglian coast. They are trying to raise awareness of the challenges Amputees face after injury.

They are among a group of 30 limbless veterans from both sides of the Atlantic who are joining forces to show that being disabled does not mean being disempowered. The ride will start from Sandringham on 6th October and end on Thursday 11th October 2012 at the Cutty Sark in Greenwich, London.

The amputees will ride on modified bikes, hand cycles and standard road bikes as part of Soldier Ride UK, now in its 2nd year. It is the UK version of the highly successful Soldier Ride series in the US, organised by the Wounded Warrior Project (WWP) and supported by President Bush since its first event in 2004. For the amputees, completing a tough physical challenge together with injured, like-minded people will mean a fellowship of shared experiences, proving that together there is life after disabling injury, after amputation, after trauma.

Dave, Kelvin, and Steve’s lives are stories of survival; stories that show how to keep going and to achieve great things. They want to inspire other amputees and disabled people through their achievements and bring home the sacrifice they have made whilst serving their country.

• Dave Watson is a triple amputee from Preston who was injured in Afghanistan. He was chosen to carry the Olympic flame in Lancaster and the Paralympic flame in Preston. Dave will be starting the ride on his 27th Birthday.
• Steve Gill is a double amputee from Leicester, who was injured in Northern Ireland. Steve is now a coach for Leicester Cobras Wheelchair Basketball Club and has founded the Baron Motorsports Foundation to make racing accessible to disabled people.
• Kelvin Daniels is a leg amputee from Preston. Since his injury, Kelvin has honed his sporting skills, playing sitting volleyball for Great Britain and becoming the British and UK Power lifting champion for the last 3 years.

(See attached photographs)
Emphasising the special relationship between the US and UK, BLESMA’s General Secretary Jerome Church MBE says, “We are all part of a special fellowship dedicated to supporting those who have given so much for our respective countries – so often in common cause. Life for those disabled in war is always going to be tough – this is how we rise above it.”

In the UK, the ride is a collaborative effort between ABF The Soldiers’ Charity – the national charity of the British Army, BLESMA – The Limbless Veterans, and the Wounded Warrior Project. Between them, the three charities provide support and rehabilitation to serving and veteran service personnel, both injured and disabled, and their families on both sides of the Atlantic.

The riders will cover the route from Sandringham to Greenwich, London in six days passing through Cromer, Great Yarmouth, Southwold, Ipswich, Colchester, Southend-on-Sea and Greenwich, London.

2. Soldier Ride UK is on Facebook - search Soldier Ride UK and Twitter @soldierrideuk
3. ABF -The Soldiers’ Charity - the Army’s national charity since 1944 - supports thousands of soldiers, former soldiers and their families each year. The charity makes financial grants to individuals in times of need and specialist charities supporting the wider Army family. The need for support continues to grow. Visit www.soldierscharity.org
4. BLESMA – The Limbless Veterans help all wounded servicemen and women who have lost limbs, the use of limbs or eyes, to rebuild their lives by providing rehabilitation activities and welfare support. Established in 1932, our programmes allow our men, women and their families to face the challenges ahead with renewed confidence and self-belief. Find us on facebook.com/blesma, follow us @blesma or visit www.blesma.org
5. The Wounded Warrior Project is an American charity which aims to raise awareness of the needs of injured service men and women as well as to provide direct support to meet those needs. The very first Soldier Ride was launched by President Barack Obama in 2004 as a fundraising event for The Wounded Warrior Project. Visit www.woundedwarriorproject.org
6. 3 Photographs from Soldier Ride UK 2011

This press release was distributed by ResponseSource Press Release Wire on behalf of BLESMA The Limbless Veterans in the following categories: Health, Leisure & Hobbies, Sport, for more information visit https://pressreleasewire.responsesource.com/about.