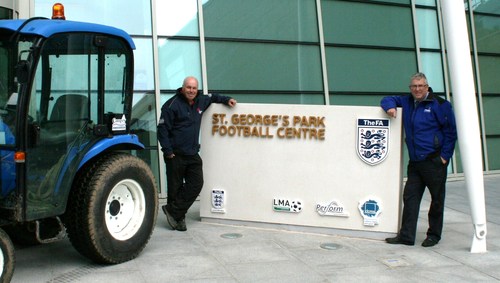 WHEN the Duke and Duchess of Cambridge formally open The FA National Football Centre at St. George’s Park in Staffordshire today (October 9th) it will mark the hard work of head groundsman Alan Ferguson and his 12 staff to get 12 pitches to a peak level of perfection.

Set in National Forest, the site covers 330 acres and includes two hotels, a sports science facility and FA offices. The 12 pitches include 10 natural and two synthetic . . . and the synthetic indoor facility is the largest in the UK.

“It has been an enormous project to co-ordinate all of the grass areas as well as the utilities, floodlighting and irrigation but we have come through the construction side and are now in the operational phase,” says Alan.

“Since the initial renovation the pitches have not been affected particularly by the poor weather as they are well constructed and well-drained,” says Alan. “The worst areas are the surroundings which have been too wet to fully landscape.”
To make the project run smoothly Alan targeted specific companies and suppliers to work with. These companies were chosen for reliability, back-up support and expertise.

Campey Turf Care Systems of Macclesfield is one of these companies and has worked closely with Alan throughout the construction and renovation of the pitches. “Campeys are the ideal turf renovation partner,” says Alan. “They have a huge and diverse range of equipment and they have the necessary expertise to give the right advice.”

For Alan the future will be all about planning the maintenance around the usage programme for each type of surface.

Alan explains that they intend to run with the FA-recommended average playing times – five to six hours a week on the natural pitches, 60 hours on the synthetics, 20 hours on the GrassMaster stadium pitch and between 15 and 20 on the fibre sand.

They are already on target for 85per cent annual capacity in advanced pitch bookings from across the globe right through until 2013.

In addition there are plans to accommodate Rugby Union training and matches in the future which will add further anomalies to the wear and tear of all the surfaces.

“There will be no luxury of a closed season for extensive renovations,” says Alan. “We intend to keep a pitch free at all times in order to rotate use to allow for regular mini-renovations. But that still leaves a combined total in the region of 150-160 hours of play a week across the park. To take a pitch out for 10 weeks will be a rare occurrence for the foreseeable future.”

Managing director Richard Campey is very aware of the constraints placed on Alan and is delighted to be working with him on such a prominent and highly influential venture.

“We provided several pieces of kit for Alan to trial before purchasing, so he could see exactly how the machines worked,” says Richard. “The Imants Shockwave, Coremaster Xtreme, Koro Recycling Dresser and Koro Field Top Maker are all excellent at achieving good results quickly, with the minimum of down time. “

The Koro Field Top Maker was used extensively during the initial renovation stages to strip the pitches back to a clean rootzone and will be used again for the mini renovations.

For Alan, certain pieces of maintenance machinery stand out as being essential to maintaining the highest standard of playing surface.

“The combination of Imants RotoSweep and verti-cutting is proving invaluable,” enthuses Alan. He uses it every month to remove thatch and weeds and to give a light aeration to a depth of 5mm. It picks up all sorts of debris and loose herbage which has definitely prevented a build-up of algae, keeping the surfaces clean and healthy.

There is only 13 ground staff responsible for the entire site – and only seven of them are permanent. “We will be looking to increase this number in the future,” says Alan, “but for now we have to be disciplined in where we allocate our resources. So the Dakota Turf Tender is also an enormous asset,”

“It allows us to top dress fast and with incredible accuracy and spread width. We can afford to top dress little and often.”

With support from the Campey team , their expertise and some remarkable equipment, Alan and his groundstaff have worked around the clock to present this prestigious centre at its very best for the official Royal opening.
Press contact is Charmian Robinson at ABR Publicity on 07775 876655 or email abr.publicity@virgin.net

The company acts as a new equipment dealer for some of the most respected grounds care machinery manufacturers including Dakota, Imants, Koro, Raycam, Vredo and Omarv.

The company also has a thriving used machinery business and a subsidiary company, Tines Direct, which supplies replacement tines, blades and replacement parts for a wide range of turf care machinery.