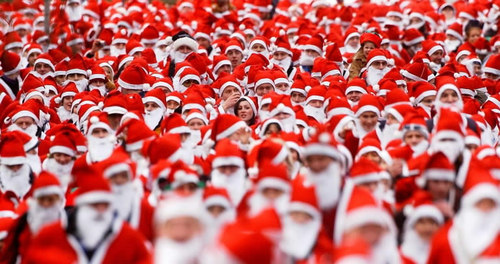 Running 10K in a Santa Suit is actually quite a challenge but I am really looking forward to it. It’s a great event and loads of fun.

Run 4 Cancer, the cancer charity for runners, is pleased to announce that it has secured a further 50 places for this year’s Santa Run London. This year's Santa Run will take place in Greenwich Park on Sunday the 9th of December 2012.

Run 4 Cancer, pronounced run for cancer, was set up by a group of running enthusiasts who have all lost a close friend or relative to cancer. Run entirely on a voluntary basis, the team at Run 4 Cancer raise funds by taking part in running challenges all over the world. The funds raised are used to provide days out / short-breaks for families living with cancer and to make grants to palliative care centres. The running charity also funds research into the positive effects of exercise and how it can help both prevent cancer and assist in recovery post diagnosis.

The Santa Run London 2012 attracts over 2,000 Santas every year and thousands more spectators. Open to all runners from the age of eight upwards, the course is also suitable for disabled people in wheelchairs.

For the £20 entry fee, Run 4 Cancer supporters receive a complimentary Santa Suit comprising hat, jacket, trousers, belt and beard. Runners are able to keep the Santa Suits after the race.

For 2012, two distances are available – either 5Km or 10Km. The 5Km circuit takes in the sights of Greenwich Park and the recent Olympic show jumping arena. To take part, runners are asked to raise a minimum sponsorship fund of £100. In addition to receiving a Santa Suit, each participant will be given a secure online fundraising page on Run 4 Cancer's website to collect both donations and words of encouragement.

Commenting on the event, Run 4 Cancer Chairman Stu Bowker said “I’ve run in previous Santa runs in Brighton and they are great fun. In fact, it’s rather difficult to concentrate on running when you’re laughing so much. Seeing 2,000 Santas run in a massive group is guaranteed to bring a smile to the faces of both runners and spectators alike.”

Stu concluded “This year, I’ll be running for my girlfriend’s uncle who recently lost his battle with cancer. Running 10K in a Santa Suit is actually quite a challenge but I am really looking forward to it. It’s a great event and loads of fun. If anyone else would like to get involved in the charity, please get in touch”

Set up by a group of keen runners who had all lost a close friend or relative to cancer, Run 4 Cancer is primarily a provider of respite days and holidays for British families affected by cancer. The charity also makes grants to cancer care centres and funds research into the positive effects of exercise (e.g. running) and how it can help prevent cancer and aid recovery post diagnosis. A standalone Division of the 4 Cancer Group, Run 4 Cancer is run by a dedicated team of runners from its offices in Newbury.