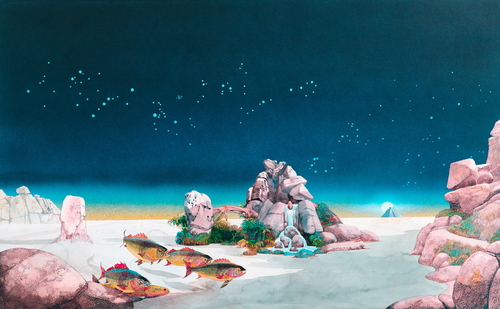 The exhibition, which will run from November 4th – 18th, will take place within the main building at Trading Boundaries and will be launched on Saturday 3rd November by 'An Intimate Evening with Roger Dean and Rick Wakeman' which will feature an acoustic set of live music that has been the soundtrack to a great deal of Roger’s work.

This is a rare opportunity to hear the celebrated artist talk about his career and his work with such iconic bands as YES and Asia and will be the ONLY occasion he has shared the stage with Rick Wakeman.

These two engaging raconteurs will relate fascinating anecdotes of their shared history and combined work projects. This is a unique opportunity for fans and collectors alike to witness this extraordinary combination of talent. A very limited number of tickets will be available to purchase.

Roger Dean will be unveiling new works during the exhibition, including a new album cover of which details are yet to be released.

To compliment the exhibition, world-class YES tribute band YESSONGS ITALY will be making their UK debut on November 10th, followed by prog rock legends Focus, who are scheduled to perform at this unique music venue on Friday 16th November 2011.

Roger Dean is an internationally recognised artist and designer, whose evocative and visionary images with associated graphics, logos, and lettering, created a new genre of work.

Made popular through the media of album covers and posters his work has sold in excess of sixty million copies world-wide. He has recently been in the public eye due to the uncanny resemblance to his work of many of the landscapes used as a backdrop to Avatar.

Rick Wakeman is an English keyboard player, composer and songwriter best known for being the former keyboardist in the progressive rock band YES. He is also known for his solo albums, of which he has sold over 50 million copies.

He has featured on songs by artists including Black Sabbath, David Bowie, T Rex, Elton John and Cat Stevens. In September he received the Prog God Award at the 2012 Progressive Rock Awards.

He has also contributed to the BBC comedy series Grumpy Old Men and is known for Rick's Place, his former radio show on Planet Rock, which aired until December 2010.

We would be extremely grateful if you could include this press release in your arts/ents section.

As always, we do have a limited number of press tickets available. If you would like to come down to review the evening and/or visit the exhibition please contact Katie Brown on 01825 790200 or email katie@tradingboundaries.com.