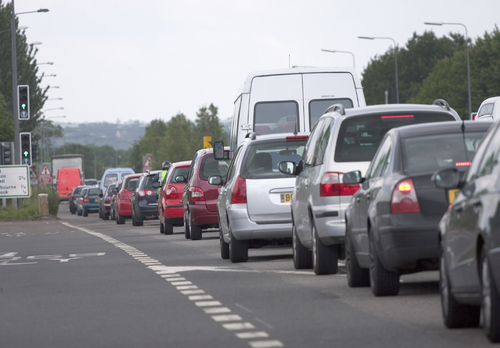 If you think the traffic is bad here, try driving in Istanbul, Warsaw or Marseille. These cities have the most congested streets in Europe, new research shows. And while it can be tough getting from A to B in some British cities, they are much better than many other rush hour hotspots across the continent, says the report.

The combination of sky high petrol prices and traffic measures like the 'C' charge in London has helped cut the number of drivers in many city centres, said satnav firm TomTom in its quarterly Congestion Index. Leeds-Bradford is the most congested conurbation in the UK yet only sits 17th in the top 60 European cities who suffer the most during their peaktime rush hours.

TomTom monitors millions of traffic journeys a year to compare the percentage change between non-peak times and rush hour to compile its hotspot list. Istanbul is the worst for jams as its peak time is 57 per cent more congested than its non peak times.

Poland's capital, Warsaw, is in second place with a 45 per cent increase and Marseille is in third with a 40 per cent leap, narrowly ahead of Palermo in Italy. The top ten includes capitals Paris and Rome, both notorious for the constant stream of traffic in the city centres, plus German industrial towns Hamburg and Stuttgart.

The top 60 includes NINE British cities but only two are in the top 20, Leeds-Bradford with a 27 per cent rise between off-peak and peak and London with a 26 per cent increase.

However, according to TomTom, congestion rates in Leeds-Bradford have shot up by 10 percentage points compared with the same quarter last year, the highest increase of anywhere in Europe. Birmingham, placed 35th overall in the European table, has the second highest leap - rising from a 17% increase in travel times in peak periods to 20%.

Other British cities to feature in the congestion index include Liverpool, Manchester and Sheffield along with Newcastle-Sunderland (combined), Nottingham and Glasgow.

A spokesman for TomTom said: "With the support of millions of our customers we have captured anonymous travel time information in all the territories where we are active. We are now able to understand real life driving patterns by time of day, day of week, time of year and around special events.

"Over the years we have built the world's largest database of historic travel times and the most detailed and accurate real-time traffic information available. Contrary to popular belief there are often multiple ways to reach a destination and avoid traffic congestion but finding the fastest route is a complex task."

For the full Congestion Index Report visit the TomTom website.

...and the ranking of British cities in the European list: