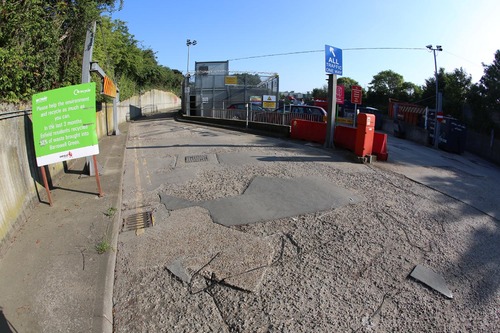 Back in June 2004 the concrete access road to the Barrowell Green Recycling Centre had spalled making the surface uneven and a potential hazard to the many vehicles that pass across it.

Civil Engineering Contractors AH Nicholls were contracted by the London Borough of Enfield to carry out the concrete repair as part of a general refurbishment project at the centre. A H Nicholls specified Ronacrete’s RonaScreed Concrete to fill the voids in the concrete and to create a level surface. RonaScreed Concrete is a two-component mortar comprising bagged cement/ fillers and polymer gauging liquid which is applied to prepared concrete that has been primed with Ronacrete Rapid primer.

The concrete was saw cut at repair edges to form a square edge and concrete within the saw cuts was scabbled to a depth of approximately 40 to 50 mm before thorough removal of oil and other contamination. All loose materials were removed from exposed surfaces before the concrete was dampened with clean water and primer was brush into to the damp surface.

RonaScreed Concrete was mixed in a forced action mixer and immediately placed onto the wet/ tacky primer; very thick sections were placed wet on wet in layers of equal thickness to ensure good compaction. The mortar was closed with a steel float and the repairs were ready for traffic six hours later. .

In 2012 Ian Hofton from AH Nicholls returned to the site and noticed that while the surrounding concrete had become spalled, the repaired sections were still holding strong.

“It is interesting to find that these reinstatements are largely intact and the surrounding concrete is now in a spalled state leaving the patches standing proud. The depot takes a lot of traffic and I feel that it is a testament to Ronacrete’s products”.

“While I am delighted to hear of the durability of this product, I am not surprised. RonaScreed Concrete has historically been used for repairing concrete slabs in the most onerous of service conditions, the excellent condition of the repairs at Barrowell Green, despite failure of the concrete surrounding them endorses our confidence in the product.”

The speed of curing of RonaScreed Concrete makes it ideal for floor renewal or renovation in factories, warehouses, loading bays, on ramps and other areas of concrete that must be reinstated with minimum disruption and delay. The formulation allows it to be applied at temperatures as low as 0°C, facilitating external work during cold weather.