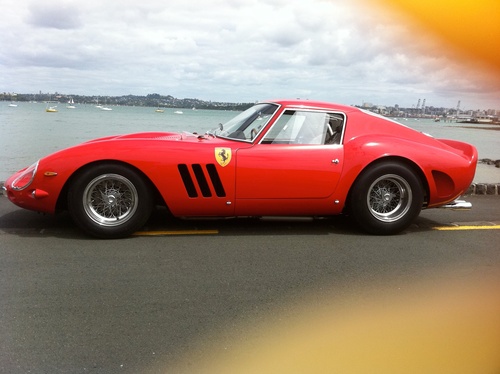 When former McLaren Team Manager Alastair Caldwell spun his 1965 Ferrari 330 GT around the Inca Trail classic rally, the car was left in tatters. Then he discovered a New Zealand company who had replicated a GTO and took his old car for the same treatment.

“The car wasn’t suitable for the job or the way I drive and it suffered a lot,” Alastair explained of the 56 day, 27,000 mile trip around South America, “First of all I rebuilt the mechanical bits, but the bodywork was pretty tatty and tired.”

Then in New Zealand in 2010, Alastair read a local magazine article about a company who had replicated a GTO. He asked them to upscale his 330.

“Sadly this company in New Zealand went into receivership in the middle of doing a really bad job, so I was left with an unfinished car and a huge cost.”

Not deterred, Alastair took on the task himself. He hired three New Zealanders to complete work on the car. He tries to forget the cost of paying for the same job twice, and Alastair now owns a beautiful vehicle, which auctions at around £250k.

This year, having recently completed the 2012 Trans-America Challenge in a classic Rolls Royce Silver Cloud, Alastair is currently seeking to rally the GTO: “I have no particular event in mind as yet but will rally the car and rally it hard if need be!”

Despite having retired from Formula 1 and now in his late 60s, Alastair continues his colourful life both on the road and in business. In 1983 he established the UK’s first self storage company, Space Station.

Under increasing demand, Space Station is now the longest-running self storage company in the UK, operating in Berkshire, West London and Greater London, for domestic, business and student use – where Alastair can be found hard at work when not hard-rallying classic cars.

High resolution photography of the Ferrari being rebuilt and pictures of the finished car are available on request from the Insight Group (details above).

Alastair Caldwell was McLaren’s Team Manager in their most successful years of ’74 and ’76, a time of great change and excitement. Alastair spent his childhood in New Zealand, evading the police after illegal street races and skipping school to play pool and work on cars. In 1967 Alastair returned to England and took a job as a cleaner at McLaren, ascending to Team Manager and the boss of racing legends such as Nelson Piquet and James Hunt. He has recently been consultant advisor to Ron Howard, director of the movie, Rush, about the great rivalry between James Hunt and Nikki Lauda on the racetrack. Stephen Mangan plays Alastair in the movie.

In 1983, Alastair started his company Space Station, the longest established self storage company in the UK. In a quarter of an acre of land at the back of a friend’s rubbish tip, Alastair put a number of shipping containers in rows for people to rent. Demand grew, he opened more sites with more containers, and continues to expand, running the success that Space Solution is today. Space Station's website can be found at www.space-station.co.uk