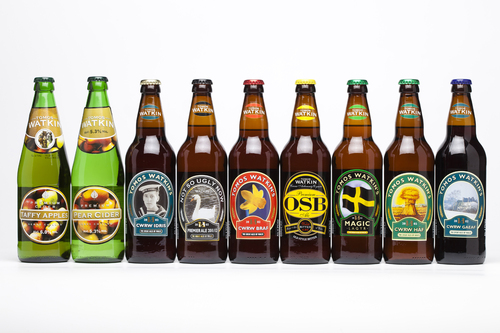 Sydneysiders will soon be sipping Welsh beer as the first shipment of award-winning Tomos Watkin ales heads for Australia.

Produced by Swansea brewers, The Hurns Brewing Company, the complete Tomos Watkin bottled range has been snapped up by distributors in Sydney keen to bring a taste of Wales to beer lovers ‘Down Under’.

For the company - which has just been named Food & Drink Award at the Insider Made in Wales Awards 2012 - it is the latest development in a series of export successes, which sees ‘Tomos Watkin – the Great Ales of Wales’ sold in America, Hong Kong, Singapore, Dubai, France, Spain and Denmark.

“We are delighted Tomos Watkin ales are going to be available in Australia, a country which is renowned for its love of good beer,” says Connie Parry, Hurns’ Chief Executive Officer.

“Exporting has become an important part of our business, and we are currently handling enquiries from Chile, and next month I will be travelling to Shanghai for one of the biggest food and drink trade events in China to explore market opportunities in the region.”

Available across the UK in supermarkets including Tesco, Asda, Sainsbury’s and Co-op, as well as independent retailers, pubs, hotels and restaurants, the Tomos Watkin range comprises of beers, lager and cider, both bottled and cask.

Says Connie, “It is a very exciting time for us, last month we won a Great Taste Award and only last week we were honoured at the Insider Made in Wales Awards, and we are also finalists in this year’s Wales the True Taste Food & Drink Awards.
“These awards and our export achievements are very much the result of the hard work and dedication by everyone in the company, and we are all very proud indeed.”

The family owned company is run by Connie and her brother Phil Parry, whose grandfather Idris Parry founded the business in the 19th century producing ginger beer, mineral water and fruit cordials.

Now employing 69 people and with an annual turn over of circa £10 million, the beers are traditionally hand brewed by the company’s highly skilled brewers at its 22,000sq ft. purpose built brewery in Swansea.

The company has received numerous awards and plaudits for its brewing, and also exporting skills, among them Wales the True Taste Food & Drink Awards, CAMRA, Great Taste Awards, and were named World Beer Champions in Chicago.