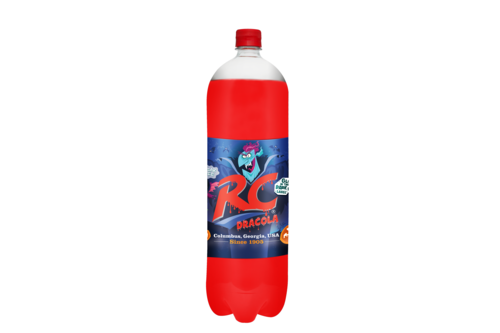 With its blood-red colour and refreshing bubbles, this fang-tastic fizz will make the perfect drink for any Halloween party

Fang-tastic fizz for a £1

With its blood-red colour and refreshing bubbles, this fang-tastic fizz will make the perfect drink for any Halloween party. What’s more, its seasonally suited label even glows in the dark making it the perfect twilight tipple.

In fact, the only thing that’s not so scary about this product is the price! At just £1 per 2litre bottle, RC Dracola offers fantastic value for money and makes an ideal party treat.

Here are a few serving tips to try:

Create an ice-scream cola float by popping a scoop of ice cream into a half-filled glass of RC Dracola.

Prepare a petrifying punch with RC Dracola as your base and garnish this with eyeball sweets.

Pop a pair of plastic vampire fangs over the base of a glass and the fill with Dracola and crushed ice for a fresh and frightening treat.

1. Originally launched in 1905 by Claud Hatcher in Columbus, Georgia, U.S.A., consumers first knew RC® cola as “Chero-Cola”. In 1934, Chero-Cola was reformulated and re-released as Royal Crown.

a. 1950s – First to sell soft drinks nationally in cans and to introduce the 16 ounce bottle

b. 1960s – First to introduce a low-calorie diet cola, Diet Rite, and the all-aluminium beverage can

3. RC cola is a part of American popular culture:

a. Television/Movies –RC was featured in the Jerry Lewis movie, The Nutty Professor and The Green Mile with Tom Hanks.