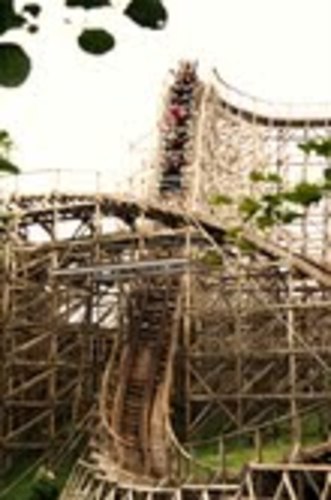 Oakwood Theme Park’s iconic Megafobia ride has been voted the best wooden rollercoaster in the UK at a prestigious awards ceremony. The Welsh visitor attraction was voted 27th in the Top 50 wooden coaster rides worldwide and was the highest placed British entry.


The Golden Ticket Awards are the Oscars of the theme park world. This year’s event was held at Dollywood in Tennessee.

Oakwood Theme Park’s Anthony Crowdie said: “We’re delighted that Megafobia has been recognised at such a prestigious awards ceremony. It’s a hugely popular ride both among theme park afficionados and ordinary visitors and people travel from across the world to ride it”.

Opened in 1996 and manufactured by the leading US company Custom Coasters International, Oakwood Theme Park’s Magphobia is close to a kilometre in length, is 26 metres at its highest point and reaches speeds in excess of 77 kilometres per hour.

Famed as one of the wildest wooden coasters on the planet, the ride has been voted the best ride in the UK and the third best ride in the world by coaster enthusiasts from the Roller Coaster Club of Great Britain.

In 2010 it was listed as one of the Top Ten rides in the world in a poll conducted for Cheapflights.com. With a maximum vertical angle of 55 degrees and 25 metre drops towards a lake combined with unique crossovers this twister has attained legendary status among coaster fans worldwide.

Chairman of the Rollercoaster Club of Great Britain, Andy Hine MBE, who has ridden 1,000 different roller coasters more than 35,000 times calls it a ‘modern classic’.

“All around the world theme parks compete to build the scariest white-knuckle roller coasters of all but most spectacular doesn’t always mean best,” he explained.