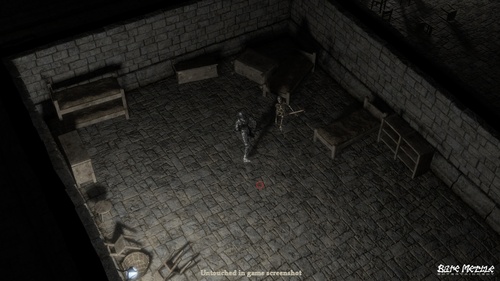 Launching one of Kickstarter’s inaugural UK projects, Bare Mettle is seeking to raise GBP 150,000 to complete Sui Generis. Backers can secure a digital copy of the game on release for as little as GBP 10. Further details can be found on the Sui Generis Kickstarter project page at http://kck.st/PkmGrD.

Madoc Evans, CEO and Founder of Bare Mettle Entertainment said “To realise our vision I have built powerful new graphics and physics engines from the ground up. These advances allow characters and objects to interact dynamically and accurately, according to actual physical forces, in unprecedented ways.”

Sui Generis boasts a host of distinguishing features including:

• Open world gameplay. Explore this richly created world according to your own desires and ability. All characters you encounter in Sui Generis are guided by advanced artificial intelligence and subject to the same rules. As your capabilities advance, you will learn to face greater dangers and complete more daring feats.
• Deep customization. Gain powers and develop skills to create unique builds and play styles in a hugely dynamic environment where there are many paths to success.
• Believable fiction. Carefully designed and researched so it feels authentic down to the smallest detail, the world of Sui Generis feels alive and functions independently of your interaction with it.
• Revolutionary physics technology. Utilising a ground breaking, custom built physics engine, all animations and interactions are governed by actual physical forces, bringing an unprecedented level of realism to the gameplay.
• Stunning graphics. Utilising a proprietary 3D graphics engine built from the ground up, Sui Generis is rendered with incredible realism.

Bare Mettle have developed an integrated suite of proprietary tools for content development, allowing dramatic workflow efficiencies and permitting a production value that would typically require an industry-scale undertaking. This allows Sui Generis to be developed by a small, nimble team at a fraction of the cost it would otherwise take, and with much greater creative freedom.

The project has already garnered over 1300 backers, including leading game developers such as Brian Fargo, who tweeted “My first backed UK Kickstarter project. Looks like fun.”

Fan comments have been equally enthusiastic:

• “It's quite simply the most realistic and mind blowing graphics I've ever seen. I urge others to get on board with what can only be described as an industry changing and revolutionary development in gaming.” – Paul
• “After seeing the game's pitch and the videos, how could I not support this game? Technical wonders aside, the developers clearly have a great vision for the game” – Tomas

Major publications have already started to take notice, including PC Gamer who tweeted “Woow, the medieval combat physics in isometric RPG Sui Generis have totally mesmerized us. Very worth a watch”, and Rock, Paper Shotgun, who published an article entitled “I Want Every Game To Be Made In The Sui Generis Engine”

In addition to the Kickstarter page, demonstration videos and screenshots can be found at http://www.baremettle.com/sg/media/.

Sui Generis is planned for release in May 2014. For further details please email contact@baremettle.com and follow us on twitter.com/bare_mettle and on Facebook at http://www.facebook.com/pages/Sui-Generis/449790085085319. More information can also be found on our website at www.baremettle.com.

Bare Mettle Entertainment is a start-up game developer whose mission is to take games and game technology forward in an exciting new direction. The company is comprised of a small team of experienced professionals with a history of developing advanced applications and bespoke 3D solutions. Bare Mettle is headquartered in London, UK.