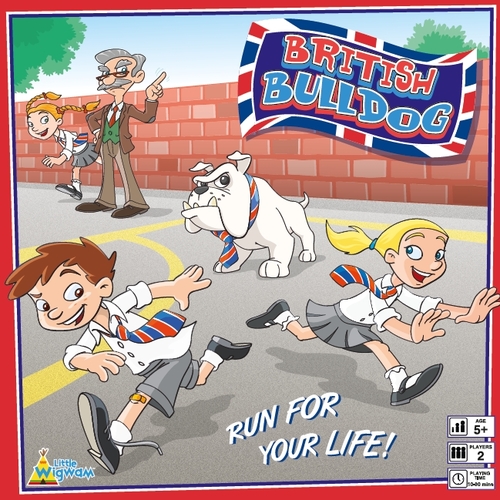 generations of family members who remember British Bulldog from their own schooldays can get stuck in without risking life and limb!

There’s a treat under the tree for schoolkids this Christmas with a brand new board game that combines the chase-and-capture fun of British Bulldog with counting and strategy skills. Schools love to ban it in the playground, but with this version of the classic game, the health and safety bureaucrats won’t get a look in.

Children from age five to teens and beyond compete head-to-head on a playground-themed board. Runners charge back and forth trying to avoid the Bulldog. Teachers can help, but if the Runners get caught then it's "British Bulldog"!

Younger kids can hone their counting skills and spatial awareness, using directional and number dice to move across the grid, while competitive older players can think strategically to stage ambitious captures and forays. They’ll enjoy all the fun of the fast-moving playground game without the bumps and bruises!

For Christmas shoppers struggling to choose a toy that pint-sized recipients won’t already have in their toy cupboard, this brand new game is the perfect, original gift. Parents will love British Bulldog's simple rules and set-up which mean that two kids of any age can play together independently. And in the Christmas holidays, generations of family members who remember British Bulldog from their own schooldays can get stuck in without risking life and limb!

British Bulldog is the latest innovation from Little Wigwam, the family company behind the top-selling range of educational placemats and jigsaws. Mark Slade, founder of Little Wigwam, says: “We’ve spent over a year developing and testing the game to turn the rough and tumble fun of playground favourite British Bulldog into a board game that captures kids’ imaginations and helps them develop key skills at the same time. And most importantly, our young testers love the thrill of the chase when they play it.”

Little Wigwam is a family-owned business based in Surrey. Founded in 2010, it aims to provide quality educational products for children, designed by teachers and reviewed by kids. Visit www.littlewigwam.com to see the full range.