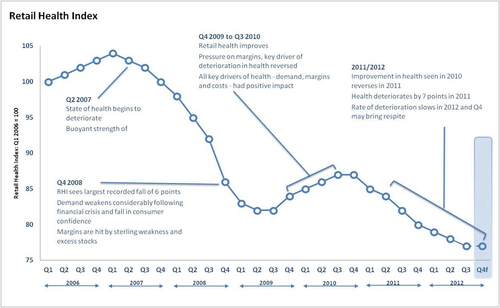 • Retail demand continued to be subdued in quarter three with a soft July and August. Demand is expected to improve slightly in quarter four.

• Costs remained largely neutral to health in quarter three. Legislation to extend Sunday opening hours over the course of the Olympic and Paralympic Games added some extra pressure. Rising fuel and commodity prices are expected to exert a more negative influence on retail health in quarter four.

The health of retailing in the UK continued to decline in quarter three, although there are some signs of improvement in quarter four, according to the KPMG/Ipsos Retail Think Tank (RTT). Following its quarterly meeting in October, the RTT reports that quarter three of 2012 was largely as expected, with a flat-demand summer followed by a slight uplift in the health of retail in the final two weeks of September. The RTT’s Retail Health Index dropped one point to 77 over the quarter. This is the 7th consecutive quarterly drop of the Retail Health Index. As expected, the London Olympic Games had little or no impact on the state of retail health across the country as a whole.

The upturn in demand towards the end of September was largely attributable to the onset of autumnal weather, boosting demand for seasonal goods. Though consumer confidence is still negative, the RTT noted that it is at least moving in the right direction now. Consumers are beginning to feel more comfortable in this new normal retail world. Employment too is incredibly strong which will help sustain levels of demand. The hope is that this trend will continue, bringing some relief to retailers in the final months of the year as long as retailers present product ranges that are fresh and not too similar to one another.

Although demand is expected to increase in the final quarter of 2012, especially in November and December ahead of Christmas, the RTT forecasts that pressure on margins and increased costs will continue to have a negative impact on the state of retail health in the UK in quarter four. Once again, retailers will be forced to enter price wars to compete for custom whilst at the same time contending with rising costs including energy prices.

The Christmas trading period in particular promises to be an interesting one for retailers, as consumers, with less disposable income, become more choosey with their purchase decisions. The RTT highlights that consumers are becoming more aware of retailers’ marketing and promotional activities, and may be inclined to goods buy earlier or later, depending on the strategies they expect retailers to employ.

Overall the RTT expects that the Retail Health Index will remain unchanged at 77 for quarter four.

Commenting on quarter three, David McCorquodale, Head of Retail, KPMG UK, said: “Consumer demand has continued to be very weak and overall the state of retail health continues on a slight downward trajectory. There was some cause for optimism in late September, but we must be careful not to pay too much attention to that slight upturn. Last year, because of the warmer weather, consumers were not out buying autumnal clothing. With the weather this year more in tune with seasonal averages, clothing has been in demand.”

Nick Bubb, independent analyst, added some flesh to the bones: “Despite the good September, the BRC Retail Sales Monitor still only averaged +0.5% LFL in quarter three, as a result of weak July/August trading, and that was lower than the Easter-adjusted Q2 outcome. Volumes are still negative in Food Retail, given high food price inflation. Quarter four has started well, but we should not get ahead of ourselves. This remains a tough retail climate.”

Neil Saunders, Managing Director of Retail Analysts, Conlumino, argued that one of the problems for the retail sector is over capacity: “July and August were not good months for the retail sector, and unfortunately the Olympic Games did not provide as much of a boost as hoped. There is simply too much supply in the system. All of the grocers saw deterioration in their margins and over-capacity remains a problem for many retailers. We will continue to see a lot of discounting and that isn’t good for the overall health of the sector.”

Speaking about the types of goods that consumers will be buying over the Christmas period, Martin Hayward, HAYWARD Strategy and Futures, said: “I suspect we’re going to see more of a gadget Christmas this year, with people more inclined to spend their money on the latest enthusiasm products and technologies, such as smart TVs and the newest iPad. It will also be interesting to see how consumers are learning the lessons of Christmas buying. If we are heading for a gadget Christmas, then consumers might be inclined to buy earlier in the quarter to ensure they don’t miss out on products.”

Commenting on the economic situation facing retailers and consumers, Vicky Redwood, Chief UK Economist at Capital Economics, said: “Like for like growth over the quarter was just 0.5+ and it’s the same impasse that we had last time. Oil prices have gone back up and energy prices are again on the increase, and this will have a direct impact on consumers and retailers. At one point the near-term outlook for inflation and real incomes was looking relatively positive, but not any more. If there is one glimmer of hope, it’s that there has been an improvement in the employment situation; incomes are not falling as significantly as they were before, and people do have some more discretionary income from jobs that have been created.”

Commenting on the property market, Mark Teale of CB Richard Ellis, said: “Until recently, the net growth in multiple branch units averaged 2%-3% annually. As Retail Locations’ newly released multiple expansion figures show, new branch openings in the UK are now only just exceeding closures. Because the few multiples that are still expanding aggressively are tending to take much larger than average unit sizes, net floor space growth continues despite the overall sector decline in branch expansion activity. It should be noted in this respect that a single major grocery superstore, for example, can be equivalent in size to 50 or more traditional High Street unit shops, ie large numbers of unit shops can close without having much impact on aggregate floor space totals. As it is the large unit players that are leading expansion activity currently - grocers and discount players in particular - the rate of floor space growth will continue to exceed the rate of growth in branch numbers. The underlying problem that dogs the sector, as always, is a chronic shortage of larger floor-plate modern shopping stock. At the same time there is a huge over-supply of small-scale tertiary unit-shops that nobody wants. The traditional demand-supply mismatch in UK shop property markets remains as pronounced as ever.”

Richard Lowe, Head of Retail & Wholesale at Barclays, said: “It has been a long haul, but we are a little more optimistic as we hurtle towards Christmas. News that we have moved out of recession should help boost consumer confidence, but there is still some way to go before growth becomes the new normal once again.”

Summarising the RTT’s October discussion, Tim Denison of Ipsos Retail Performance, said: “The future is still very uncertain. On balance we believe that retail health will level out in quarter four, but the million dollar question is whether this is just a temporary respite brought about by consumers treating themselves at Christmas, at the end of a tough year, or whether there is a genuine improvement in market conditions and sentiment. We’re more inclined to believe it’s the former.”

Definitions: The RTT assesses the state of health of the UK retail sector by considering the factors that influence its three key drivers.