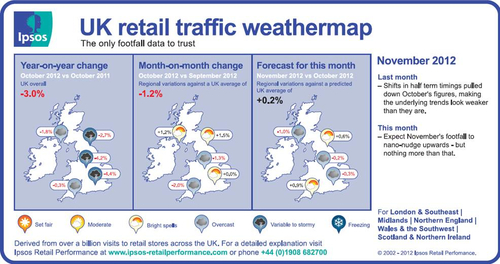 Following a glimmer of hope for retailers in the month of September, when UK non-food retail footfall increased for the first time in 2012, the Retail Traffic Index (RTI) figures for October were left to disappoint.

Compiled monthly by Ipsos Retail Performance, the RTI showed that footfall in non-food stores across the UK in October was down by 3% year-on-year for the month, and down 1.2% on September. This despite a 1% increase in GDP in quarter three, a fall in unemployment to 7.9%, and inflation reaching a three year low of 2.2%. London and the South East was the part of the country most affected, with footfall in the region down 4.4% year-on-year and down 1.1% against September.

Ipsos Retail Performance believes that the anomaly is largely attributable to a distortion in the data because of the school half term falling later this year than last. The underlying trend remains close to last year’s levels, which may indicate that retail footfall is at the bottom of the slide.

However, significant and sustained growth in the number of shopping trips is facing further challenges as new financial pressures emerge. Higher gas and electricity bills are on their way, wage inflation is still stuck below inflation, and changes to the child benefit scheme will affect the incomes of hundreds of thousands of families.

Commenting on the latest RTI figures, Dr Tim Denison, Head of Retail Intelligence at Ipsos Retail Performance, said: “These remain tough times for consumers and retailers and it looks like both will be travelling in the crawler lane for some time to come. Retailers will be hoping that recent improvements in market conditions will hold firm and that the weather does not disrupt shoppers from getting out as it has done in the past two years.

“As for consumers, tough times make people think more, and when they do so they become more conscious and questioning of their behaviour and more will challenge old habits. This is exactly what is happening in the lives of shoppers at the moment and many are finding it quite cathartic. Feeling inwardly content with what they are now spending, and what they are spending it on, is very much part of the new normal.”

Dr Denison believes this new attitude will carry through to Christmas shopping behaviour. He explains: “This year extra effort will be spent on seeking out gifts thoughtfully rather than reactively as last minute emergencies. Following this course will actually save shoppers money, as well as give them a sense of greater fulfilment. People should get to the shops early this year to avoid disappointment of sell outs of those special presents they had planned to buy for family and friends. ”

Ipsos has been listed on the Paris Stock Exchange since 1999 and generated global revenues of €1.140 billion ($1.6 billion U.S.) in 2010.
Visit www.ipsos.com to learn more about Ipsos’ offerings and capabilities.

Ipsos Retail Performance is home to the Retail Traffic Index series, which for over 10 years has been the industry’s leading tracker of national, regional and sector retail footfall trends. It is also co-founder of the KPMG/Ipsos Retail Think Tank,
offering thought leadership on the state of retail health and the future of retailing.