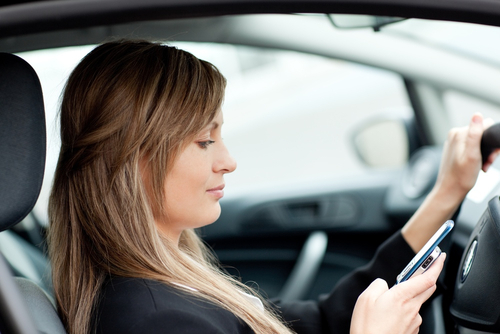 There are many situations where people talking on mobile phones can be annoying - like in the quiet carriage, the library or the cinema.
But motorists are are sick and tired of conversations they canŌĆÖt even hear, according to a new survey by specialist motor broker Adrian Flux.

When asked what annoyed them most about other drivers, 32 per cent of 1,000 motorists surveyed said mobile phone use on the road was the most infuriating habit.

The news comes after research revealed that 50 per cent of insurers questioned wouldnŌĆÖt even provide a quote for a driver awarded three points for the offence (coded CU80) while the other half would impose a premium hike of nearly 20 per cent.

In addition to points, the CU80 also attracts a ┬Ż60 fine which pales into insignificance when bearing in mind that insurance premiums for those convicted of driving while using a mobile phone can soar by hundreds, if not thousands, of pounds.

A CU80 conviction remains on a driverŌĆÖs licence for four years, during which they will be legally required to declare it when securing insurance.

Mobile phone users behind the wheel were deemed to be more annoying than tailgating drivers (18 per cent), middle-lane hogs (13 per cent), drivers not using indicators (10 per cent) and speeding motorists (five per cent).

The survey of 1,000 motor insurance customers also shows that one in four motorists would welcome jail sentences for insurance dodgers while 40 per cent called for them to be banned from the road.

The number of people being issued with CU80 convictions has almost doubled since 2007 with more than 200,000 penalties handed out last year.

Adrian Flux Insurance Services deal with more than 40 different insurance providers to ensure customers ŌĆō even those with CU80 convictions ŌĆō can find a deal that suits their needs and their wallet.

Gerry Bucke, general manager at Flux, said: ŌĆ£Drivers with convictions for using their mobile phones on the road are finding it increasingly difficult to secure insurance. Statistics show that the risk of someone with a CU80 conviction making a claim is similar to that of people with drink driving convictions and 40 per cent higher than those with no convictions at all. If insurers do offer insurance to people with CU80 convictions, drivers are looking at a rise in cost anywhere from 15 per cent to 50 per cent. Our survey shows that drivers realise how dangerous it is to use your phone while you are driving and hopefully this attitude will drive down the number of CU80 convictions being handed out.ŌĆØ

For more information please contact Matt Ware on 01553 818550 or at matt@mazemedia.co.uk

This press release was distributed by ResponseSource Press Release Wire on behalf of Black Vanilla / To The End Media in the following categories: Motoring, Personal Finance, for more information visit https://pressreleasewire.responsesource.com/about.