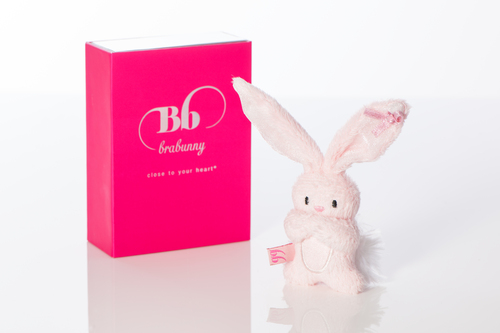 The idea is the brainchild of Terry Harvey, a former policeman, who was inspired to do something when he discovered a friend had breast cancer.

A fluffy pink bunny worn down your bra looks set to make charity ribbons and wristbands a thing of the past.

Endorsed by Cancer Research UK, Brabunny – www.brabunny.com - certainly puts the fun back into fund raising. And with £1 from every sale going directly to the charity, it’s a meaningful way to show your support. Literally.

The idea is the brainchild of Terry Harvey, a former policeman, who was inspired to do something when he discovered a friend had breast cancer.

People fell in love with the cute little character and, in response to customer demand, the recently launched range includes Brabunny chocolate, cards and T-shirts.

“When I found out a close family friend was going through treatment for breast cancer, I wanted to do something that would help women everywhere. Despite being cute, Brabunny certainly draws attention to the issue!

I’m hoping to raise £100, 000 for Cancer Research UK in year one alone. Another design for the little rabbit is now underway as a limited edition for Race For Life in 2013”.

Brabunny retails for £7.99 and can be bought on-line at www.brabunny.com along with the other merchandise.