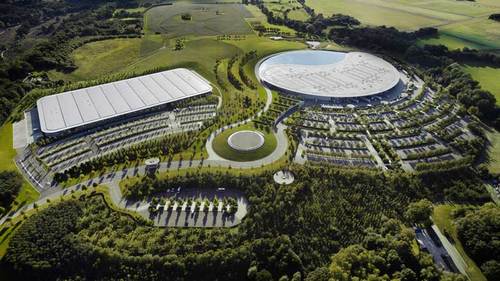 The process has enabled us to identify new areas to increase carbon efficiency, bringing significant energy savings to all of our operations.

McLaren Group has been recertified with the Carbon Trust Standard for successfully measuring, managing and reducing carbon emissions across all of its UK operations.

This achievement makes Vodafone McLaren Mercedes (http://www.mclaren.com/formula1) the first Formula 1 team to retain the Carbon Trust Standard, and underlines the Group’s continuous quest to improve efficiency and reduce the environmental impact of its direct operations.

McLaren Group was first awarded the Carbon Trust Standard in December 2010 after several years of rigorous assessment, and has honed its energy efficiency strategies to reduce its carbon footprint on a relative basis by 9% - based on tonnes of carbon and equivalent (CO2e) emissions relative to head-count. This follows a two-year period of significant expansion within McLaren Automotive, which has seen the construction of the 32,000 square metre manufacturing facility, the McLaren Production Centre (MPC), the employment of nearly 300 additional full time staff, and the design, development and distribution of a range of high-performance sports cars including the 12C and 12C Spider.

The McLaren Group has continued to reduce its carbon footprint by researching and implementing state-of-the-art, energy-saving technologies across both the MPC and the McLaren Technology Centre (MTC). This process has been driven by the creativity and precision of world-class engineers from across the organisation, who compare and consider every potential energy saving measure - no matter how small. The initiatives that have contributed to the Group’s year-on-year carbon reduction include:

- The services of MPC are linked to, and supplied by, a central plant in MTC. This ensures that shared systems - such as air compressors and chillers - are operating at optimum efficiency, therefore eliminating the potential waste of running two systems at partial loads.

- Heat recovery systems across MPC capture excess process energy and redistribute it to other areas of the building in need of heat.

- The installation of new, more energy efficient simulation equipment across McLaren Racing has led to savings of 300 tonnes of CO2e per year.

- The continued deployment of new, longer-lasting and more efficient lighting within the MTC has led to a saving of 200 tonnes of CO2e per year.

“As an environmentally conscious group of companies we are extremely proud to have retained the Carbon Trust Standard, in turn becoming the first Formula 1 team ever to do so. The process has enabled us to identify new areas to increase carbon efficiency, bringing significant energy savings to all of our operations.

“It is especially satisfying to obtain recertification during a period of considerable growth across the Group, particularly within McLaren Automotive (http://www.mclarenautomotive.com/uk/default.aspx). This demonstrates our commitment to pioneering future technologies, developing new methodologies and relentlessly innovating to improve carbon efficiency.

“While this achievement is an important marker for us, it is crucial that we recognise that the Carbon Trust Standard is an ongoing process. Reducing our carbon emissions and improving our energy efficiency represents a constantly moving target – and one that our whole company is committed to pursuing.”

“It is really encouraging to see a high profile organisation like McLaren Group making real improvements to retain the Carbon Trust Standard. McLaren Group’s achievement is clear evidence of the significant results in carbon reduction that can be delivered through senior sponsorship from the top and entrenched good practise throughout a business. McLaren Group’s carbon reduction relative to head count demonstrates that growth can be decoupled from carbon to grow your business without proportionally increasing emissions”.

About the Carbon Trust
The Carbon Trust is an independent company with a mission to accelerate the move to a low carbon economy. The Carbon Trust:
• advises businesses, governments and the public sector on opportunities in a sustainable, low carbon world.
• measures and certifies the environmental footprint of organisations, products and services.
• helps develop and deploy low carbon technologies and solutions, from energy efficiency to renewable power.

About McLaren Group
The McLaren Group is an organisation with one goal: to win. It is perhaps best known for its successful and iconic Vodafone McLaren Mercedes Formula 1 cars, but it is more than just a racing team. Guided by the vision of executive chairman Ron Dennis, one of the UK’s most dynamic entrepreneurs, the McLaren Group encompasses an exciting range of ultra-high-technology businesses including McLaren Applied Technologies, McLaren Electronic Systems, Absolute Taste and McLaren Marketing.