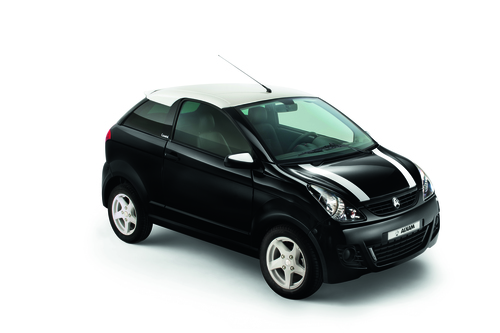 this is no ordinary car - in fact, it’s not technically even a car

But this is no ordinary car - in fact, it’s not technically even a car.

The Aixam Coupe S is classed as a light quadricycle, dubbed carpeds, which means it can be driven by 16-year-olds holding a moped licence.

To qualify as a quadricycle, vehicles must weigh less than 350kg and have a power output not exceeding 4kw, with a maximum speed of 30mph.

The launch of the vehicle in the UK follows EU legislation which allowed carpeds to be driven on the nation’s roads with a moped licence.
Set to be launched in the UK at the Motorcycle Live event from November 24 at the NEC in Birmingham, the vehicles are considered to be a safer alternative than two-wheeled mopeds.

Justin Bond, Aixam’s UK manager, said: “The vehicle was launched internationally at the Paris Motor Show to great acclaim.
“We believe that the young rider market for scooters and mopeds has been contracting lately due to the difficulty in convincing parents of the safety issues surrounding mopeds and scooters, and this will offer a safer method of transport to this demographic.”
Gerry Bucke, general manager of specialist insurance broker Bikesure, said a typical premium for a 16-year-old with a moped licence and no accidents or convictions would be around £2,200, based on a mileage of 5000 per year.
“This is in the same ballpark to a 17-year-old driving a small standard car, and it’s certainly a safer, drier and warmer method of getting about for 16-year-olds who want their independence on the roads,” he added.

The vehicles are powered by a Kubota 400cc diesel engine, and come with 12 months free road tax, alloy wheels and a CD/radio.
French car-maker Aixam hopes to sell up to 1,000 units in the first year, with the first vehicles being delivered in January.
They will be sold through a network of motorcycle dealers, and the Coupe S will retail at £9,999.

For information about insurance for the vehicle please contact Matt Ware on 01553 818550 or at matt@mazemedia.co.uk

This press release was distributed by ResponseSource Press Release Wire on behalf of Black Vanilla / To The End Media in the following categories: Motoring, for more information visit https://pressreleasewire.responsesource.com/about.