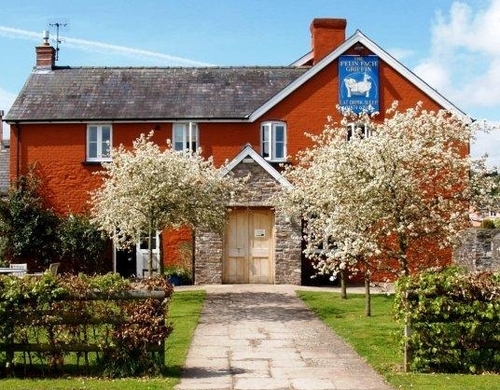 The Felin Fach Griffin, a seven bedroom inn sitting in between The Brecon Beacons and The Black Mountains, has been named by new edition of The Good Hotel Guide as one of this year’s ten recipients of a César award. It is also named Welsh Inn of the Year and perfect for a romantic break in Wales.

The Césars are annual awards, announced by The Good Hotel Guide ahead of the publication of their guide. The César is named after the great hotelier, César Ritz, and is given to hospitality establishments in the United Kingdom and Ireland considered outstanding in their own class.

The Griffin has been owned since May 2000 by brothers Charles and Edmund Inkin through their company,

The hotel has seven bedrooms and a thriving bar and restaurant, and is grounded in their belief in doing the simple things well. Julie Bell is host at The Griffin and Ross Bruce has been Head Chef since 2011.

The manager, Julie Bell, and the well-trained staff create a relaxed atmosphere described by Guide readers as a haven in a storm. This is just the sort of informal but well-managed place that our readers want us to find”.

Edmund Inkin commented on the Good Hotel Guide’s award of a César, “Every year The Good Hotel Guide is the one independent guidebook that really matters to us and our teams. Just to be included in the guide is a thrill. To be given a César is beyond exciting and is a real tribute to the team from those judges who know what matters: our guests.”