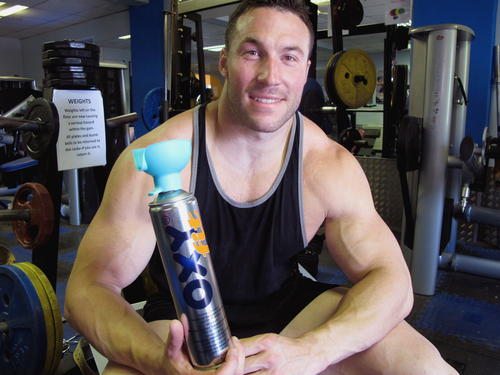 OXYfit gives me the confidence to train to the ultimate level, especially on days when I’m doing my heaviest weights

UK bodybuilder Richard Gozdecki has become world natural bodybuilding champion for the second year in a row – and has thanked fitness and health supplement OXYfit for helping give him the winning edge.

OXYfit, the UK's first oxygen-in-a-can fitness and health product, is designed to extend periods of optimal training. It is used by a wide range of sports people, plus health and fitness fans, including runners, rugby players and footballers.

It gives athletes the confidence of knowing they can train harder, train for longer and achieve more during intense workouts, accelerating improvement.

It meant he retained his title, won sensationally at his first attempt in 2011, also beating Martin Daniels by one point. He is also the 2012 WNBF European champion.

As part of his truly punishing training regime for all these events, he used OXYfit, which is 99.5% pure pharmaceutical grade oxygen.

Richard, who trains in Coventry, West Midlands, said: “OXYfit gives me the confidence to train to the ultimate level, especially on days when I’m doing my heaviest weights, both for pre-set preparation and post-set recovery.

“When it comes to being absolutely 100% ready for competition, OXYfit is one of the things I use to give me the edge. And, as I have proved with both these titles, the winning margin can be tiny.”

OXYfit, which is a 100% natural, safe, scientifically tested and researched product, allows athletes to quickly build up oxygen levels in the blood, effectively countering the effect of oxygen debt.

It comes in lightweight two, five, eight, 66 and 110 litre cans – and is used by simply inhaling the oxygen in several short bursts in rest periods during training sessions.

Richard said: “I use OXYfit during my most intense workouts of the week on back and legs, which are the areas that need most work for me. It’s awesome for recovery between sets.”

During these intense training sessions he completes full sets of dead lifts of up to 260kg, squats of 200kg and leg presses of up to 700kg, breathing in OXYfit before and after each lung-busting set.

A study into the effect of OXYfit at the Faculty of Physical Education and Sport at Charles University in Prague, has found it helps people recover more quickly from exercise so their performance during following periods of exertion is improved.

The researchers concluded that the results “convincingly demonstrated” that OXYfit “positively affected” performance. Compared with ice hockey players who breathed only air, the players who had used OXYfit experienced a 50% improvement in performance in the second period of exercise.

The Journal of Medicine and Science in Sports has reported that breathing a higher concentrate of oxygen compared with normal air, which is 21 per cent oxygen, increases run time to exhaustion on a treadmill by up to 75 per cent.

This press release was distributed by ResponseSource Press Release Wire on behalf of marketing at the mill in the following categories: Health, Leisure & Hobbies, Sport, for more information visit https://pressreleasewire.responsesource.com/about.