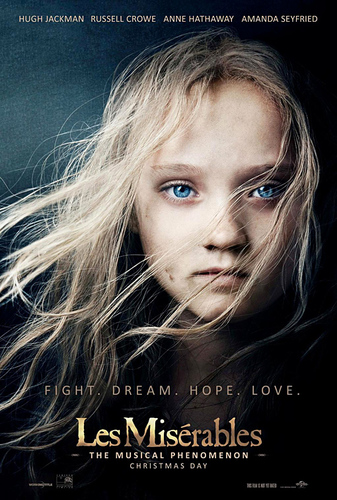 The beloved, global stage sensation Les Misérables, which has been smashing box office records for 27 years, has been adapted into a motion-picture by the Academy Award-winning director, Tom Hooper.

The Working Title/Cameron Mackintosh production, which stars Hugh Jackman, Oscar winner Russell Crowe, Anne Hathaway and Amanda Seyfried, premieres on Christmas Day in the United States and will be on UK general release from 11th January 2013.

Anticipation has been building for the feature length film due to the stellar cast which also includes Eddie Redmayne, Aaron Tveit, Samantha Barks, Helena Bonham Carter and Sacha Baron Cohen and the strong behind-the-scenes team, led by The King's Speech's Academy Award®-winning director, Tom Hooper. His spectacular interpretation of Victor Hugo's epic tale has been hailed as his best work yet and he has been credited for his detailed sets which have helped create the dramatic backdrop of 19th-century France and the perfect environment for the cast to shine.

The plot centres around ex-prisoner Jean Valjean (Jackman), who is hunted for decades by the ruthless policeman Javert (Crowe) after he breaks parole. When Valjean agrees to care for factory worker Fantine's (Hathaway) young daughter, Cosette, their lives change forever.

The stage show is one of the world's longest-running musicals and the film features some of its iconic songs—including “I Dreamed a Dream,” “Bring Him Home,” “One Day More” and “On My Own”. Early previews are dominated by mentions of Anne Hathaway's rendition of "I Dreamed a Dream" from her role as Fantine. In recent interviews she shared her fear of singing the stand-out anthem of the story and also revealed that her mother starred in the stage version in her younger years, which added to her inspiration for the role. Director, Tom Hooper has praised her performance, describing her as 'breathtaking' in 'Les Misérables’. See the full interview with MTV here: Tom Hooper Les Miserables interview with MTV .

The UK waits in anticipation for 11th January 2013 for the release of what is surely destined to become a classic family film.

Tom Hooper also directed “The Damned United” starring Michael Sheen from a screenplay by Peter Morgan. The film was nominated for Best British film at the South Bank Show Awards following a premiere at the Toronto Film Festival. Previous to that Tom Hooper had an unprecedented run of success at the Golden Globes with his work for HBO, winning the Golden Globe for best movie or mini-series made for television three years in a row. His starring actors and actresses won Golden Globes for their performances three years running.