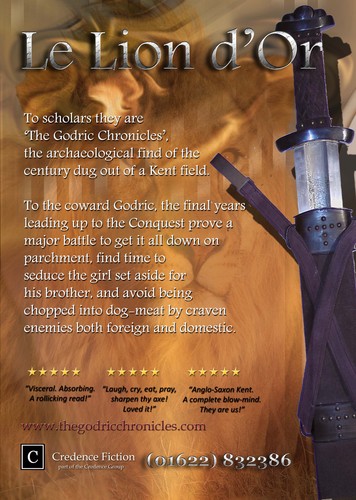 Maidstone, Kent, UK – December 1, 2012 – A new Anglo-Saxon fiction series written by a Kent author aims to put King Harold of Hastings back in the public eye.

Richard Goodwin has been frustrated for years by the entertainment industry’s fixation with fictional stories rather than the meat of England’s gripping destiny.
“How many books and films have we had on the worn-out themes of King Arthur, Merlin and Robin Hood? Why not cover the greatest story in English history – the events leading up to and including 1066?”

Goodwin began researching the period himself twelve years ago and admits you get hooked. “The 1066 story is plotline heaven. The historical characters alone of the 1042-1066 period are giants in their own right. Anglo-Saxon Kent and Sussex make an irresistible backdrop since these areas are in the firing line of the story.”

Part 1 of The Godric Chronicles, entitled Le Lion d’Or, is due for release on December 1. The story is set in central Kent in the year 1042 at the start of Edward the Confessor’s reign, and covers two brothers making the rocky transition from boys to men. The younger, the coward Godric, becomes a chronicler to chart his adventures, intrigues, the unfolding scandals and the kingdom’s eventual fate at the hands of ‘William that Bastard’ in 1066.

At the end of his life (and the series), Godric buries his chronicles to protect his family from England’s brutal new Norman aristocracy. A thousand years later they are dug up in a Yalding sheep field by amazed experts who, for the first time, will experience the Conquest from the view of the vanquished.

Visit the book site
Read an interview with the author