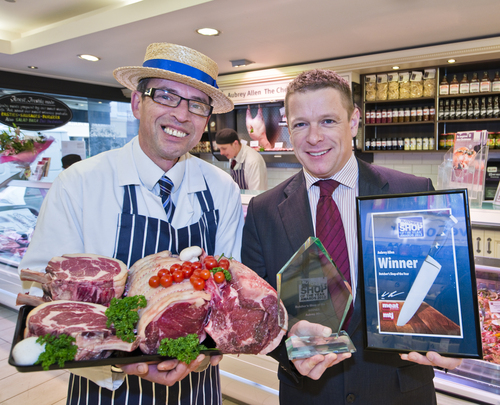 A Midlands-based retailer has been crowned the UK’s best butcher’s shop of 2012 at the annual Butcher’s Shop of the Year awards!

Aubrey Allen, a third generation family butchers from Leamington Spa, Warwickshire, successfully defended its title as the region’s favourite butcher in the Midlands and East of England and then went on to beat off stiff competition to claim the prestigious national award, organised by Meat Trades Journal.

The shop received overwhelming recognition for its outstanding quality meat and service at the awards, which celebrate the best butchers’ shops around the country. This adds a further claim to fame for the Aubrey Allen company, which also retails online and supplies some of the UK’s top chefs, including Raymond Blanc and Alain Roux, from its Coventry-based headquarters.

A delighted Russell Allen, managing director of Aubrey Allen said: “We are all just so thrilled to win what is the most coveted award in our industry, I think it’s the greatest accolade you can have. It’s really nice to be recognised by your peers, which is what this award is all about. We have always strived for quality since being established by my Grandfather in 1933 and this ultimate tribute is testimony to all the hard work over nearly 80 years and our continued loyal customer support from around the UK. This award will give people more confidence to buy from Aubrey Allen as they will now officially be buying from the best.”

According to Meat Trades Journal, Aubrey Allen, which specialises in restaurant quality meats, wowed the judges with its overall value for money offer, while they were also impressed with its thriving lunchtime, hot food service and special ‘Dinner Party Packs’ that provide a three-course meal at home.

The judges described Aubrey Allen as a “fully mature business that shouts top restaurant-standard quality, but maintains good value” and commended the enthusiasm and sheer determination of the staff. As well as completing a “stunning” refit and increasing sales by 12% over the last 12 months, the business has recently embarked on a Customer Butchery School that teaches various craft and cookery skills.

Aubrey Allen has established a reputation for providing the best of the best quality of meat since 1933 and operates from its Coventry-based headquarters and state-of-the-art butchery facility in Warwickshire. As an award winning, independent family business, Aubrey Allen is now headed on a day to day basis by managing director Russell Allen who is the grandson of founder Aubrey. The enterprise has developed a nationwide reputation as the Chef’s Butcher supplying many of the country’s top kitchens, including Raymond Blanc and Alain Roux.

The world-class butchery business, which has an unrivalled reputation for its dry ageing process for beef, also extends to its famous Butcher’s shop, delicatessen and Oscar’s French Bistro restaurant in Leamington Spa, as well as a highly successful direct to the door meat delivery service. In addition, Aubrey Allen Events provides a bespoke premier catering service operating regionally and nationally for private functions and in particular weddings.

This press release was distributed by ResponseSource Press Release Wire on behalf of More Than PR in the following categories: Food & Drink, Business & Finance, for more information visit https://pressreleasewire.responsesource.com/about.